Residence built in 1890 for Imlay’s founder 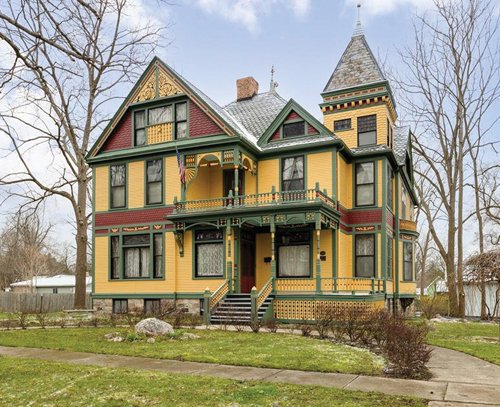 The Queen Anne-style home is on the United States Department of the Interior’s National Register of Historic Places.

Recently, 240 N. Main Street, the Queen-Anne-style home built in 1890 for Charles Palmer, the founder of Imlay City, went on the market. A Birmingham, MI realtor who’s listing the property is marketing the 3,845 square foot home’s history as a unique selling point.

With wood floors throughout, the incredible details within this home have been well preserved as a beautiful part of history,” realtors Paul and Benjamin Meldrum of Max Brock Realtors wrote in the description.

The exterior of the home features a plaque noting the property has been placed on the National Register of Historic Places by the United States Department of the Interior as ‘The Charles Palmer House.’ It also has a plaque from the Imlay City Historical Society designating 1890 as the year it was built.

Descendants of Charles Palmer posed for photos in front of the grand home this past summer when they were honored during Imlay City’s Sesquicentennial, the 150th anniversary of the city’s founding.

Palmer, an engineer with the railboard, purchased 240 acres between Capac and Attica, which he surveyed and proceeded to plat before selling home sites in the late 1800s. He would go on to construct the Bancroft House, a railroad hotel that opened for business on August 1870, just days after the railroad began service to the community that Palmer named Imlay City in honor of the township—Imlay—that surrounded it.

A link to the home’s listing, including 70 photos of the property, can be found at themeldrumbrothers.com.