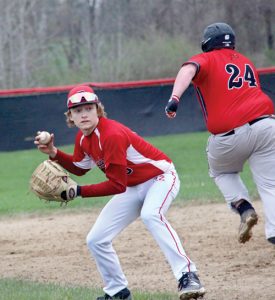 In the opener, Dryden registered a 2-1 triumph against Kingston.

Ledford was the winning Dryden pitcher. He gave up two hits over six innings, struck out 13 and walked three.

In the second contest, Dryden fell by a 1-0 score.

Ledford (a pair of singles) paced Dryden’s offensive attack. He was backed by Zack Lemke and Fliedner (a single each).