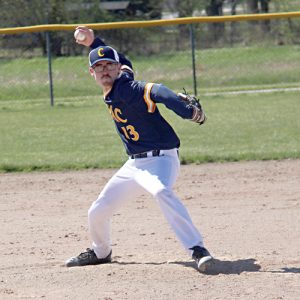 In the opener, Capac pulled out a 6-4 victory over Imlay City.

Ruegsegger (a homer) plus Tim Bochatyn and Jose Rodriguez (a single each) furnished Capac’s hits.

Jared Fahley and Brendan Langmesser shared the pitching chores for the winning Capac side. They allowed eight total hits, struck out five and walked two.

Beau Hund (a single and a double) and Scott McAvoy (a pair of singles) paced Imlay City. The Spartans also had Tyler Delong, JD Trout, Xander Nolin and Brendan Monville (a single each) reach the hitting column.

In the second game, Capac notched a 6-1 win against Imlay City.

Ruegsegger (a double and a triple) plus Derek Mason and Zack Langmesser (a pair of singles apiece) led Capac with multiple-hit performances. They were backed by by Garrett Montney, Rodriguez and Bochatyn.

Zack Langmesser and Mason Smith were the pitchers Capac used on the way to a victory. They gave up eight total hits over four innings, struck out nine and walked three.