Almont started things off with a 20-0 win against Suttons Bay. 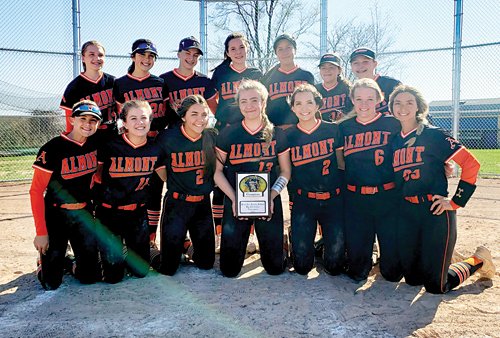 Devin Johnston (two singles and a homer) and Kylie Tennant (three singles) paced Almont’s offensive attack. They were backed by Myah McLean (a pair of doubles), Kendall Roszczewski (a single and a triple), Grace Koenig and Brooklyn Bunch (a pair of singles each), Elly Schapman (a double) along with Lydia LaCavera (a single).

McLean was the winning Almont pitcher, throwing a no-hitter.

Almont then went to 2-0, accomplishing the feat with an 11-0 victory over Birch Run.

Johnston (a single and two triples), along with Tennant and LaCavera (two singles and a double each) notched Almont’s top plate credentials. They were backed by Koenig (a single and a triple) plus Roszczewski, Bunch, Schapman and McLean (a single apiece).

McLean was Almont’s pitcher of record. She allowed one hit, struck out 10 and walked none.

When the final scores were tallied, Almont prevailed 14-4.

McLean and Abby Geml shared the pitching responsibilities for the triumphant Almont side. They allowed seven total hits over five innings, retired three on strikes and walked none.

With the results, Almont now stands at 18-3 this season.