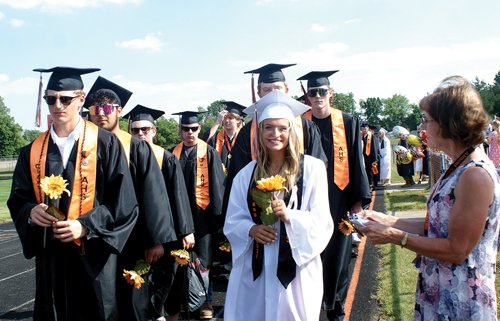 As is tradition, Almont will host their graduation ceremony on Sunday, June 5 at the high school’s football stadium. Other districts are returning to indoor events after pandemic concerns had commencements moved to outdoor venues since 2020.

TRI-CITY AREA — Cue Pomp and Circumstance—graduation ceremonies for the Class of 2022 will soon begin.

First up is Capac Community Schools where diplomas will be handed out on Sunday, May 15, at 2 p.m. at the football stadium.

Dryden High School will bid farewell to seniors on Thursday, May 26 at a 6 p.m. ceremony in the school’s gymnasium, returning to an indoor venue. For the past two years, the ceremony was held on the football field.

In Almont, seniors will don caps and gowns for a Sunday, June 5 graduation ceremony at the school’s football field at 5 p.m., retaining their outdoor ceremony tradition.

In Imlay City, a commencement ceremony is scheduled for Sunday, June 5 at 2:30 p.m. in the Imlay City High School gym. The event returns indoors after having been an outdoor event the last two years.

In the lead up to commencement ceremonies, seniors will take part in other traditional events.

In Capac, a Top Ten Breakfast was on April 21. On May 6, they’ll take their final exams, enjoy a senior picnic and receive their caps and gowns.

Senior Awards Night is slated for May 11 and on May 13 they’ll have a Senior Breakfast, do a walk through the elementary school and rehearse for the May 15 commencement ceremony.

In Dryden, May 19 is the last day of classes for seniors. The following day, graduates will take part in a Senior Luncheon, take a group photo, visit the elementary school and practice for the ceremony.

May 20 brings the Parade of Graduates at 7 p.m. The parade lineup will begin at 6:45 p.m. at the elementary school.

On May 25, a Senior Awards Ceremony is planned.

Following the May 26 ceremony, the newly-minted grads will enjoy an All Night Party and then rest up before taking part in Dryden’s 10 a.m. Memorial Day parade where they’ll walk with kindergarteners.

In Imlay City, the traditional events begin May 31 with a Senior Breakfast and marching practice. The next day, June 1, baccalaureate services will be held at 7 p.m. and on June 2, Seniors Honors Night will take place

In Almont, seniors received their caps and gowns last week at the Senior Breakfast. Senior Awards Night is slated for May 18 at 6:30 p.m. and the soon-to-be grads will practice for the big day on June 3 at 1 p.m.

In the event of inclement weather on June 5, the ceremony will be held on the next available weekday at 6 p.m., according to the high school’s calendar.

Two years ago, in the early days of the pandemic, districts were forced to adjust their year-end plan for graduates.

In 2020, Almont High School had planned to move their ceremony to the Bells Event Center and former home of Almont Elementary School. Due to pandemic restrictions that wasn’t possible so they opted for an appointment-type system where graduates signed up for time slots to receive their diplomas individually. Images were then used to create a video production that was published on the date and time of the originally scheduled ceremony.

In 2020, a drive-up style graduation was held at the Eastern Michigan State Fairgrounds. In 2021, Imlay City administrators had intentions to host four separate indoor ceremonies in the high school’s gym with a limit of six guests per student but a group of seniors urged district leaders to reconsider those plans and instead host one large outdoor ceremony. After receiving guidance from the Michigan Department of Education, Imlay City Schools announced that commencement had been shifted to the football stadium with plans for two ceremonies.

This will mark the third year that Capac’s graduation takes place in the football stadium.