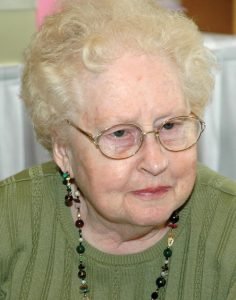 In 1949, Doris graduated from Capac High School, where she was valedictorian, homecoming queen, class secretary and a basketball player. After an unsatisfying year at the University of Michigan, she transferred without her parents’ knowledge to Michigan State College (now Michigan State University) where she remained a loyal alumna, supporter and Spartan for life.

On December 28, 1951, she married her classmate, class president Alfred C. Stuever, while he was on leave from the United States Air Force. She traveled with him first to Lowry Air Force Base in Denver.

Doris believed that a life of service is a life well lived. After her father died, she became the first woman to sit on the board of Capac State Savings Bank, which is now ChoiceOne Bank. Doris was a lifetime member of St. John’s Lutheran Church where she taught Vacation Bible School and was a member of the Altar Guild. She was a well-respected substitute teacher at Capac and other local schools for two decades. Doris was a member of Capac’s Half-Century Club, a service organization. She arranged with YMCA of the Blue Water Area to host swimming lessons in her pool, where many area children learned to swim, much to her delight.

During her 30 years as a Michigan 4-H volunteer Doris helped numerous young people learn to sew, bake and become leaders. She had been a 4-H member herself, earning supplies to grow a Victory Garden after World War II. She passed along her passion for sewing and gardening to her children and grandchildren with varying levels of success. Besides chasing kids around at the St. Clair County Fair, she clerked the sheep show for many years. She was an honorary life member of the St. Clair County 4-H Council, over which she presided for many years. In 2014, she was honored by the Michigan 4-H Foundation as a member of the Emerald Clover Society.

Unable to travel much because of the demands of dairy farming, Doris brought the world to her children through international exchange programs. They hosted young people from Japan, India, Australia, the Netherlands, Norway, Ireland, Canada, Kansas and Minnesota; giving them the full Michigan farm experience by making sure they got to bale hay, milk cows, husk sweet corn and cool off with late-night swims.

She is survived by sisters, Joan (Robert) Pope of Oak Park, IL and Marion Brennan of Mill Valley, CA. She was preceded in death by her sister, Norma Maxine (Henry) Bargiel of Davison.

The Stuever family extends their gratitude to the numerous friends, neighbors and caregivers who helped care for Doris in the final years of her life.

The funeral took place at St. John’s Lutheran Church in Capac on April 30, followed by a committal service at the Lynn Township Cemetery.

Memorials are suggested to St. John’s Lutheran Church or the Michigan 4-H Foundation.

For information and guest book kaatzfunerals.com