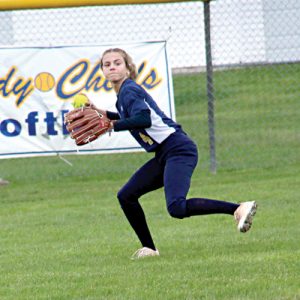 Capac centerfielder Julia Schaefer looks to throw the ball to the infield in Monday’s clash versus Memphis.

CAPAC — Chloe Moran’s clutch bunt single with two out during the bottom half of the seventh inning plated Alley Block with the deciding run as Capac edged visiting Greater Thumb Conference East counterpart Memphis, 5-4, in the opener of their doubleheader on Monday.

In the second game, Capac finished with 18 hits.

Tesnow (three singles and a double) paced Capac’s offensive attack. The Chiefs also had Hansen (single, double and a triple), Cerenity Helzer (a single and a triple), Schaefer, Roberson and Rickman (two singles apiece) plus Schneider, Moran and Schocke (a single each) reach the hitting column.

Tesnow was Capac’s pitcher of record, prevailing with relief help from Tesnow. They allowed 11 total hits, retired three on strikes and walked two.