All in for Earth Day 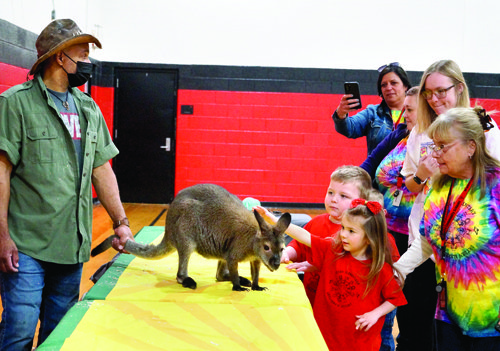 Staff and students at Dryden Elementary School delighted in meeting unique animals, like this kangaroo from Nelson’s Wildlife Safari, as part of the school’s Earth Day activities.

DRYDEN — Celebrating Earth Day at Dryden Elementary School was a full-day and full school event when the calendar turned to April 22.

Both indoors and out, students and staff took part in an array of earth and nature-focused activities.

In the gymnasium, staff from Nelson’s Wildlife Safari introduced students and youngsters in the early childhood program to an array of animals including snakes, a kangaroo, turtles and more.

In the cafeteria, sixth grade students put their science fair projects on display.

Among them was Arianna Romain and Kayden Spry who worked together to explore what substances were best for cleaning pennies. They experimented with eight different liquids including vinegar, lime juice and soy sauce.

“We thought vinegar or anything carbonated would be the best,” Arianna said of their hypothesis.

In the end, soy sauce was the best, Kayden said.

What was the most surprising thing they discovered? Lime juice was so was potent it caused a hole to form in a penny.

Students in Susan Raymer’s second grade class were quick with answers when Nicole Kopas asked, “What can we do to help the earth?”

Recycling, planting trees, turning off lights and picking up garbage were their answers.

Then Kopas challenged the students’ investigative skills to uncover the identity of a mystery organism which turned out to be an oak tree or, as one student accurately described it, “a squirrel food tree.”

Later that day an Earth Day ceremony was held at the school, followed by a parade through town, along with a chemistry assembly in the gym.