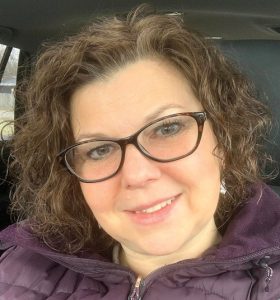 Hope Ann Wassenaar left this earthly realm on Monday, April 25, 2022 after a long battle with metastatic breast cancer. She was 48 years old. It would be wrong to say that Hope lost her battle because she never stopped fighting. No matter how much pain she was in, she would put a smile on her face and tell you…I’m fine. Like a butterfly pollinating from flower to flower, she spread joy, peace, love, and yes, HOPE, by living out God’s love in whatever she was doing. She never let cancer define her life, instead choosing to focus on family, friends, and faith. Her smile was contagious and quickly shared with others. There was no quit in Hope. Through her, we know what resilience and perseverance truly look like. Just because she is no longer here, it doesn’t mean she lost her fight.

After graduating from Michigan State University in 1995, she started working full-time in Christian camping. Although she was never a camper herself, she fell in love with camping ministry in 1993 when she had her first taste of what christian camping was all about, serving as a summer camp counselor. For over 16 years, she has been the Executive Director of Son-Life Camp & Retreat Center. Her heart was always with smaller camps, and she loved working with the staff, campers, and volunteers at Son-Life.

Hope is survived by her beloved husband of nearly 26 years, Aaron Wassenaar, and her precious children, Andrew (16) and Aliza (13.) She was the youngest of Chuck and Nancy Herpolsheimer’s three children, little sister of Brad (Cindy) Herpolsheimer and Heather (Harry) Powers, aunt extraordinaire to Calvin, Jay, Kaylie, Max, and Savannah Hope. She was a precious niece, cousin, daughter-in-law, sister-in-law, and dear friend to many.

A celebration of life will be held on Monday May 2, 2022 from 4 p.m. -7 p.m. at Son-Life Camp and Retreat Center (189 126th Ave, Wayland, MI 49348). The format will be similar to an open house, but there will be a dedicated sharing time starting at 5:30 p.m.. Hope’s favorite color was orange. It would be great if you could honor her by wearing something orange if you plan on attending.

A memorial fund has also been set up on GoFundMe in her honor. The money raised will help support organizations and causes that Hope cared about the most, including Son-Life Camp & Retreat Center and metastatic breast cancer research.

Isiah 40:31 “but those who hope in the Lord will renew their strength. They will soar on wings like eagles; they will run and not grow weary, they will walk and not be faint.”