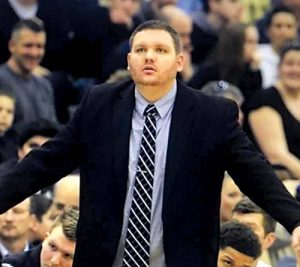 Ross Gauthier watches the action unfold from the sidelines in a game coaching Brandon.

ALMONT — The 2022-23 season will see a change at the helm of the Almont boys’ basketball program.

He takes over the post from John Hall, who announced his retirement from the position recently.

Hall leaves the program after directing Almont to a formidable 86-47 mark during his six seasons.

The 2015-16 campaign was his best over that stretch. It was there the Raiders went 20-4, collecting a BWAC title and a district championship along the way.

Gauthier coached boys’ basketball at Brandon from 2011 to 2017. He was named Flint Metro League Coach of the year for the 2015-2016 campaign, the same season his team claimed a district title.

“The above experience is impressive,” Almont High School Principal Elizabeth Gallagher commented. “But even more important is his ability to develop rapport and relationships with all student athletes,” she noted.

“There is no doubt he can develop champions on the court, but more importantly he has the ability to develop an athlete’s mindset, self confidence and self esteem that carries over to the classroom and our community.”