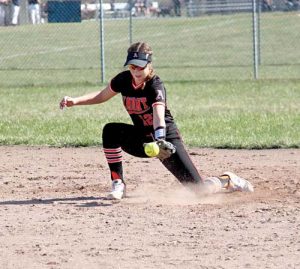 Almont infielder Grace Koenig fields the ball during a game with Port Huron Northern this past Thursday. Bunch and her teammates won twice in non-league action.

With the outcomes, Almont now stands at 4-0 overall.

In the opener, Almont collected 13 hits.

Devin Johnston (three singles), Grace Koenig and Brooklyn Bunch (a single and a double each) along with Grace Johnson (two singles) led Almont with multiple-hit performances. They were backed by Elly Schapman, Kendall Roszczewski, Lydia LaCavera and Sam Leid (a single apiece).

Myah McLean was the winning Almont pitcher. She allowed five hits, struck out six and walked one en route.

In the second game, Almont wound up with 21 hits.

Geml was Almont’s pitcher of record. She gave up one hit, retired eight on strikes and walked none.