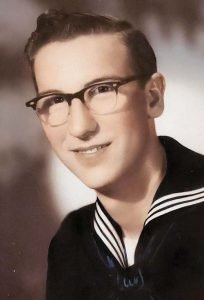 Lee Bryson, age 84, of Almont, MI died Sunday, April 24, 2022 at McLaren Lapeer Region Hospital of Lapeer, MI. Lee Edmund Bryson was born July 26, 1937 in Memphis, MI. He grew up in Memphis, MI and was a graduate of Memphis High School. He was the son of the late Arthur and the late Eva (Tallmadge) Bryson. He proudly served in the United States Navy from 1955-1958. Lee lived in Sacramento, CA until about eight years ago when he moved back to the Almont, MI area. He married Patsy Gould (a close friend from high school days) on January 17, 2014 in Almont, MI.

He was employed as a sales clerk and refrigeration repairman for A1 Appliance Center Standard Appliance Parts in Sacramento, CA.

Lee is survived by his wife, Patsy Bryson; his sons, Christopher (Janis) Bryson of Elk Grove, CA and Curtis Bryson of Sacramento, CA; daughters, Teresa (William) Seidell of Dryden, MI, Geri (John) LaClair of Lapeer, MI and Rachel Merlone of Lapeer, MI; his sisters, Evelyn Hancock and Anna Hart; and his brother, Jim Bryson. He is also survived by 16 grandchildren and 14 great-grandchildren.

He was preceded in death by his first wife, Shirley Bryson; brother, John Bryson; and infant twin siblings.

The family will be available for visitation 11-1 p.m., Monday, May 2 at Muir Brothers Funeral Home of Imlay City.

Please be sure to sign the online register at muirbrothersfh.com to share condolences with the Bryson family.