As the war in Ukraine rages on, there remains an ongoing and continuing need for modern equipment, including bulletproof vests. 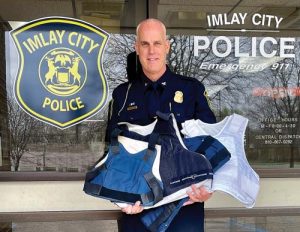 Imlay City Police Chief Brett Selby is shown with used bulletproof safety vests to be delivered to a local organization that ships much-needed materials and supplies to Ukraine.

As such, the Imlay City Police Dept. is donating four of its outdated bulletproof vests to a local organization that ships supplies to Ukraine.

The Imlay City Commission approved the donation at their regular meeting on Tuesday, April 19.

“These are first generation vests that were in their prime back in the early 2000s and placed in storage,” Selby said. “These vests have no potential monetary value because of their age and had been earmarked for shredding and destruction.”

He noted that the U.S. Department of Justice mandates that dated vests be taken out of service and replaced.

“The ICPD is donating the vests to a reputable source that is also used by the Detroit Police Dept. and the Wayne County Sheriff’s Office, among other law enforcement agencies across the state,” Selby said. “The Ukrainian Congress Committee of America also takes other needed supplies to be shipped to the Ukraine.”