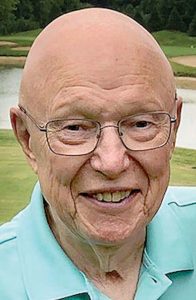 Gilbert “Gil” Mroz was born on February 6, 1934, in Sault St. Marie, the only child of the late John and Marion (Brzozowski) Mroz. Gil attended the Sault St. Marie branch of Michigan College of Mining and Technology through his sophomore year and then transferred to Houghton MCMT campus, also known as Michigan Tech University, where he majored civil engineering.

Gil served in the United States Army. After active duty, Gil served in the Army reserves and the Department of Defense sent him to Greenland to work on the Distant Early Warning Line the DOD was installing in the Arctic. After he returned from Greenland he worked for Michigan Bell where he spent his entire career. He met and married his wife, Jean, while working there. They were married May 18, 1956 and were together for over 65 years. Their first home was in Oak Park, MI, then Gil was transferred to New York, and they lived in Edison, New Jersey for a time, then moved back to Rochester, MI, where they raised their growing family. Together they had five children, Dan, John (Lynn), Debra (David Bonadeo), Karen (Ron Urman), and Judy (Bob Ziola).

Gil and Jean were very active members in their church, St. Irenaeus, in Rochester, MI. Gil was actively involved with the local Knights of Columbus. Annual family vacations to Florida and eventually west, to Arizona, introduced Jean and Gil to their eventual winter home of Sun City West. They enjoyed being “snowbirds” for over 30 years. As a couple they shared a passion for travel, visiting many places in the U.S. and Europe.

He was preceded in death by his loving wife, Jean, who died just two months prior to him. He will be remembered as a kind and devoted husband, father, grandfather and great-grandfather to his family.

Those wishing to make memorial contributions may direct them to the American Heart Association.

Please be sure to sign the online register book to share your memories and condolences with the Mroz family.