DRYDEN — Investigators, attempting to determine the cause of a deadly March 21 fire, said they now believe the blaze was intentionally set by one of the victims.

Candice Turton, 39, who died in the fire along with her two children and grandmother, is considered the lone suspect in the case “given evidence obtained to this point,” the Dryden Township Police Department in a statement issued April 20.

The investigation remains active and is now considered one of “arson, homicide and suicide,” police say. There is currently no evidence that anyone else was involved or could be considered a suspect.

Chief Shawn Peters said that additional details about the incident could possibly be released once lab and test results are complete. 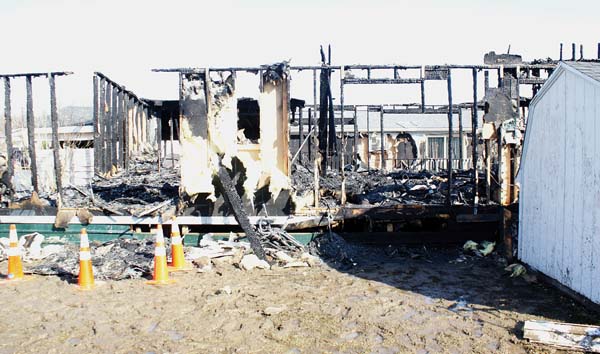 Evidence collected so far in the case is currently being reviewed by the Lapeer County Prosecutor’s office. Some reports from assisting agencies and lab analysis are also pending.

Firefighters responded to a residence on Pheasant Lane in the early morning hours of March 21 for a fully-involved structure fire. After extinguishing the flames, firefighters discovered four bodies in the home—Candice Turton, her grandmother, 87-year-old Zola Rogers and Turton’s children, 17-year-old Nathan Young and 15-year-old Kylie Young. Funeral services for the four family members were held on April 13 in Imlay City.

Neighbors in Victoria Meadows mobile home park reported hearing what sounded like a loud explosion, followed by flames, the morning of the fire.

Peters said evidence is currently being reviewed by the Lapeer County Prosecutor’s office. Although no criminal charges are likely, having other experts in the field, like Prosecutor John Miller and Chief Assistant Paul Walton, review what’s been found is good practice in a complex case like this one.

“We want to make sure we’ve covered all our bases,” Peters said.

“It’s important to have people with different perspectives look things over. You don’t want to have blinders on as to what may or may not have happened.”

“Due to the seriousness and complex nature of this case, many details have not been previously put forth. This was not an effort to be non-transparent. This was solely intended so that the department could conduct a thorough investigation and be factual and accurate on information that was obtained and released,” Peters said in the department release.

“The families of the victims are asking the media and public to respect their privacy as they mourn the loss of loved ones moving forward.”

Funeral services were held for the four victims earlier this month at the Muir Funeral Home and Celebration of Life Center.

According to their obituaries, 39-year-old Candice Turton worked at Suncrest in Lapeer and was a graduate of Waterford Kettering High School. Her grandmother, Zola Rogers, logged a 30-year career at General Motors Proving Grounds. Both leave behind many family and friends.

Peters said that investigators no longer need access to the site of the fire and the property has been released back to the mobile home park which will allow for the eventual clearing of debris.