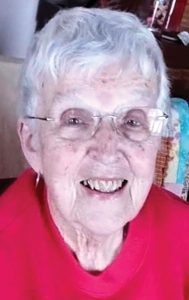 MARQUETTE, MI — Virginia Belle (Hamilton) Bell, age 86, of Marquette, passed away Sunday morning, April 10, 2022, at home, in the loving, comforting care of her family and UP Home Health and Hospice.

Born December 30, 1935, in Lapeer, MI, a daughter of Roy Lee and Margaret Lavina (Rauh) Hamilton, Virginia was raised on the family farm outside of Capac, MI. At age 7, Virginia was inspired by her church’s female pastor and a visiting female missionary, to consider being called to ministry, a call she would answer later in life. As a youngster, she was her dad’s helper and was involved in 4-H club work, later becoming St. Clair County’s “Queen of Dairying” and went on to win the 1953 title for the state of Michigan as well. Along with the title she received a scholarship to Michigan State University, where she earned her Bachelor Degree in Education. She married her long-time friend and high school sweetheart, John “Jack” Bell, Sr., on August 28, 1955 in Capac, and had two children. She taught sixth grade in Bancroft, MI and special education for Macomb County Intermediate School District based in Mt. Clemens. She taught her students life skills, including lawn care, home maintenance, auto shop and cooking skills. Throughout her years of teaching Virginia worked as a missionary, using her vacation time to serve others and spread God’s Word. She made regular trips to Haiti for two weeks at a time from 1981-2012. She served in the ministry guest house in Les Cayes, and hosted a team of medical personnel from Marquette following the earthquake in 2012. She also served on numerous other missions in Russia, Poland, Cuba, Liberia and Alaska. After retiring from teaching, Virginia and her husband, Jack, moved to the eastern U.P. in the Paradise area. Virginia became a United Methodist Church certified pastor serving the community of Paradise and other small communities in the God’s Country Cooperative. She was the director of a store very similar to The New Free Store. Jack and Virginia spent the winters of 2014 and 2015 in Marquette and attended Grace United Methodist Church in 2016. Virginia was involved with the Free Store at Grace United Methodist and helped in the kitchen serving soup and sandwiches to shoppers. After the store moved to Harvey, Virginia was still involved with the many food oriented fundraisers The New Free Store has conducted over the years. She also worked at the front desk on shopping days greeting the shoppers, holding babies and puppies, and helping with the record keeping. Virginia and her daughter, Jayme, are generous donors to and friends of The New Free Store. Virginia also continued to contribute to our community through her quilting and knitting. She was a member of Messiah Lutheran Church, the Messiah Quilters, and member of the Knotty Knitters. Throughout the years, Virginia touched many lives through her hard work, dedication, friendship, and guidance. (The preceding information was taken from an article on Virginia in the Winter 2022 edition of The New Free Store Newsletter).

Virginia was preceded in death by her parents; husband, John “Jack” Bell, Sr., in 2017; and her sister, Gertrude.

Friends may call at Messiah Lutheran Church on Saturday, May 7, beginning at 11 a.m. until the time of service at 12 noon. A reception will follow in Magnuson Hall. Interment will be made in the Paradise Methodist Cemetery at a later date.

Fassbender Swanson Hansen Funeral and Cremation Services is serving the family, where condolences may be expressed online at fassbenderswansonhansen.com