See “The Sound of Music” on stage

CAPAC — The hills will soon be alive when Capac Community Schools presents three performances of the well-know musical, “The Sound of Music.”

Production Lead and Drama Director Deanna Brownfield said a cast of about 30 students, ranging from 6th to 12th grades, have poured their heart and soul into making this production—the school’s first in two years—a success.

“Some kids spent every day of spring break here,” Brownfield said, noting that they worked on creating set pieces and set up for a benefit rummage sale.

“I think it really speaks to how much they’ve taken ownership of this production.”

“It’s pretty clear that they’re excited to be back on stage. They have exceeded our expectations,” he said.

Preparations were already underway in 2020 for students to perform the musical, Annie, when the pandemic resulted in it being canceled.

This year’s production is also noteworthy in that it features a four-person team of leaders. In addition to Brownfield and Sinclair, fellow teacher Jeffrey Jones is serving as the pit orchestra director and volunteer Jenny Brenda is overseeing costumes and the musical stage as production manager. 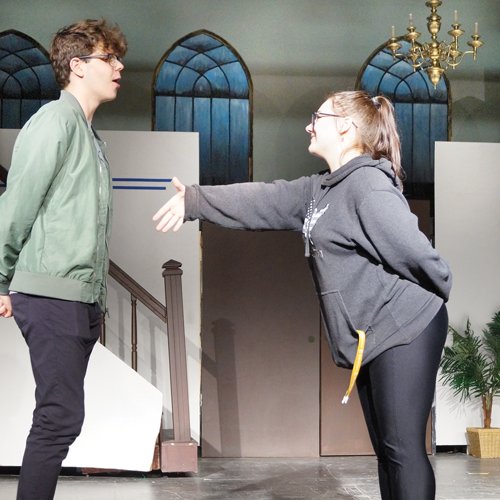 Ava Dub, who plays Maria, and Preston Lottie, cast in the role of Capt. von Trapp, rehearse their lines.

“This allows each area that we work on to be of a better quality,” Brownfield said.

Returning for this year’s production is a live orchestra.

“It’s something we’ve kept up over the years and having an orchestra really adds to the performance,” Brownfield said.

“The Sound of Music” was the final collaboration between the well-known composing duo of Rodgers & Hammerstein. Based on the memoir of Maria Augusta Trapp, the musical “follows an ebullient postulate who serves as governess to the seven children of the imperious Captain von Trapp, bringing music and joy to the household. But as the forces of Nazism take hold of Austria, Maria and the entire von Trapp family must make a moral decision,” the program description states.

Both juniors said they auditioned for a part in the musical without grand intentions.

“Every year I just tell them, put me where you need me,” Dub said.

Lottie has some experience in a leading role, having played Daddy Warbucks in the canceled production of Annie.

Neither of them was too familiar with “The Sound of Music” before they landed their parts but they quickly mastered their lines and singing parts.

Both, like their directors, are grateful for the chance to get back on stage after a two-year hiatus.

“I didn’t realize I missed it so much,” Lottie said.

Brownfield said that besides gaining experience on the stage students are picking up an array of other new skills too that can serve them well in the future whether that’s making props and backdrops or learning the ins and outs of the sound board and spotlights.

“Some kids had never painted before or have a drill in their hands for the first time,” she said.

Tickets are $12 for adults and $8 for students and seniors. Tickets can be purchased online at https://www.onthestage.tickets/show/capac-community-schools/the-sound-of-music-49067/creative

The show’s run time is two hours and 45 minutes with one 15-minute intermission.