New postmaster on the job

He’s held the title since March but his staff hosted a community open house to officially welcome him on Friday, April 8. Refreshments were served and the post office on Third Street was decorated with posters made by his four kids. 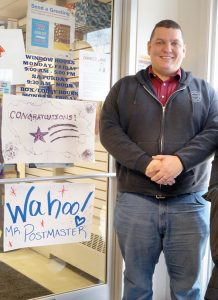 Posters made by his wife and kids decorated the post office during the open house.

“I’m enjoying it quite a bit,” he said of his new job title.

A recent transplant from Arizona, Wadsworth has worked for the postal service for 10 years. Before coming to Imlay City, he spent time at post offices in Sterling Heights, Port Huron and Mt. Morris. He’s worked as an instructor and assistant supervisor as well.

As postmaster in Imlay City, he oversees 13 employees.

He describes himself as being “slightly bilingual,” something that’s proven to be helpful when native Spanish- speaking customers require assistance at the post office’s service counter.

Although he and his family reside in Yale, Wadsworth said they frequent many businesses in the Imlay City area and feel it’s important to be a part of the community.

In addition to his full-time job, Wadsworth serves as a volunteer firefighter and first responder in St. Clair County.

In addition to managing daily operations in Imlay City, Wadsworth said he has one larger goal too—to advocate for a new post office building for Imlay City.

The plaque on the wall behind him indicates the current facility was constructed in 1956 during the Dwight Eisenhower administration.

“It’s time for an upgrade,” he said, adding that a larger space will eventually be needed as the community grows.