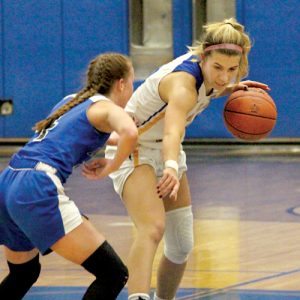 Imlay City’s Mary Lengemann dribbles the ball up the floor in a game last winter.

Lengemann laid the foundation for the postseason plaudits by netting 439 points in 22 games, leaving her with a Tri-City best output of 19 points per contest.

She amassed 1,360 points over that stretch, leaving her second on Imlay City’s career scoring list.

With her help, Imlay City concluded the 2021-22 campaign with a 19-4 overall mark and a pacesetting 14-0 Blue Water Area Conference showing. The Spartans also won a Division 2 district title.