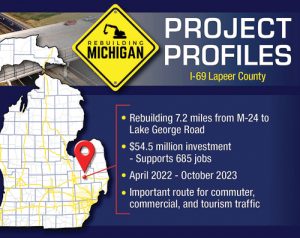 Work on the two-year project will begin with the westbound lanes between Lake George and M-24. Multiple ramp closures will be required as part of the rebuild.

LAPEER COUNTY — The latest rebuild project on I-69 is due to start next week.

The Michigan Department of Transportation (MDOT) said Monday, April 18, will be the official start date for its $54.5 million, seven mile project that will stretch from Lake George Road in Attica Township west to M-24 in Lapeer Township.

Additionally, the work will also include replacing the Five Lakes Road Rest Area.

The work will extend over two years with contractor Toebe Construction rebuilding the westbound lanes first in 2022 and then shift to the eastbound side in 2023.

“Thanks for Governor Whitmer’s Rebuilding Michigan program, we have improved the corridor at several locations across our state.”

The work is being funded through Whitmer’s “Rebuilding Michigan” program to rebuild the state highways and bridges that officials have deemed critical to the state’s economy and carry the most traffic.

“The investment strategy is aimed at fixes that result in longer useful lives and improves the condition of the state’s infrastructure,” MDOT said in a press release.

Last year, MDOT resurfaced 8.3 miles of the interstate in Lapeer County between between Newark Road in Attica Twp. and the Lapeer/St. Clair county line. The $28 million project entailed hot-mix asphalt resurfacing with a crack resistant base layer to prevent early deterioration on both east and westbound lanes.

In St. Clair County, 6.55 miles of the roadway between the Cox-Doty Drain in Mussey Township to M-19 in Riley Twp. was being reconstructed at a cost of $38 million. Dan’s Excavating Inc. was awarded the bids for both of those 2021 projects, completing the St. Clair County work one year earlier.