City also okays a request for fireworks at fairgrounds in June 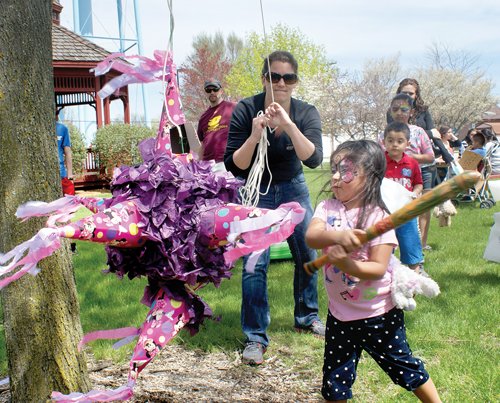 A youngster takes a swing at a pinata during a Cinco de Mayo event in Imlay City in 2016. Plans are underway for festivities to take place in downtown Imlay City this year on May 5 from 5-8 p.m.

DDA Director Lorrelei Natke informed city commissioners that a Cinco De Mayo event had not taken place in the downtown district for some years.

In response to Natke’s request, city commissioners unanimously approved a Special Event application, allowing for street closures along Main St. and Third St. between the hours of 5-8 p.m.

The May 5, 2022 Cinco De Mayo celebration will feature food, music, dancing and contests for children and adults, with the festivities located near the farmers market site at Third and Main streets. The Hispanic Service Center is also serving as an event co-host.

In another matter, Commissioner Bob Tanis requested an update on the status of a fire-damaged house on Fourth Street.

Attorney Barb Yockey, who was in the audience, said the owners property had experienced a delay in discharging from the mortgage company.

•City Manager Craig Horton informed commissioners that the city had interviewed and entered a contract with the law firm of Seibert and Dioski of Clinton Township.

•At the request of Commissioner Ted Sadler, Manager Horton said there is currently no new information pertaining to the installation of a trestle path at the viaduct.