IMLAY CITY — What began as some minor and major improvement and repairs morphed into something akin to an archaeological dig at one Main Street home.

The longtime resident and 2020 Citizen of the Year was tickled by the discoveries unearthed underneath the porch of the home, which was built in 1910.

“It’s been fascinating to see the things that got left behind,” Stroebel says, and also amazing to see some bits of local history.” 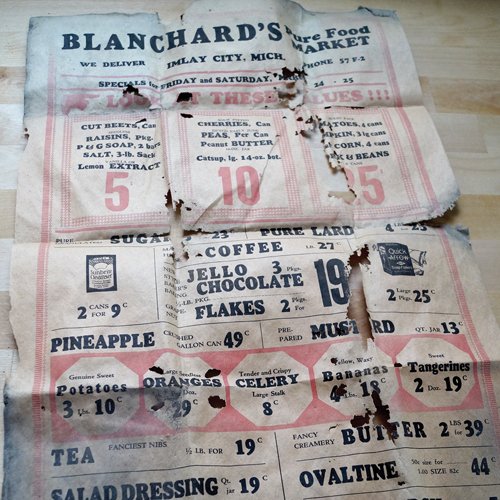 An undated, historic advertising insert for Blanchard’s Market in Imlay City is among the interesting finds at Main Street home.

Among those bits of history are newspapers that date back to 1940, ’41 and ’42—all in relatively good condition, considering their age.

“In one of them there’s an advertisement that reads ‘lakefront cottage with a screened-in porch and electricity on a nice swimming beach’ and the price is $1,600,” Stroebel grins. “That was in the Port Huron Times Herald.”

An insert advertising sale items at Blanchard’s Market in Imlay City listed sweet potatoes—3 pounds for 10 cents; two cans of Sunbrite Cleanser for 9 cents, a gallon can of crushed pineapple for 49 cents; coffee for 27 cents a pound and two dozen sweet tangerines for 19 cents. The store’s phone number is listed as ‘57 F-2.’

Other items unearthed include an antique tea cup saucer, a turn-of-the-century, well-worn children’s shoe, children’s toys including an old building block and miniature steel truck, pieces of linoleum and fabric, a smashed minnow bucket and an old, rusty Stanley knife with flecks of paint still visible on its surface.

Among the most interesting finds is an empty jar of Edwards Mayonnaise—which is shaped more like a bottle than a jar.

“It’s my favorite find,” Stroebel says. “It was black as it could be but it cleaned up well and you can see it says ‘Edwards Mayonnaise—a treat to eat.’”

Though Edwards Mayonnaise is no longer a known brand—a Google search revealed no information—Lay’s Potato Chips remain popular. An empty bag of Lay’s New Era Potato Chips with a price tag of just 10 cents was also discovered under the porch. It’s in surprisingly good condition, considering it likely dates back to the 1960s.

Another favorite find is an unusual cornerstone. The mushroom-shaped rock was obviously hand carved for a purpose, Stroebel says.

“Someone obviously used hand tools to carve it out to make it fit somewhere,” Stroebel says. “It’s really cool.”

While she’s always enjoyed the historic aspects of her home and neighborhood, finding the historic artifacts has been a special treat.

“I’m happy to share them with Tri-City Times readers,” she says.