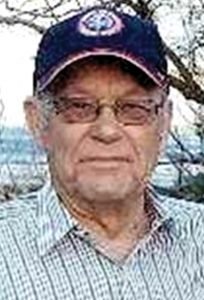 Harold Finton, age 87, of Imlay City, MI peacefully passed away Friday, April 1, 2022 at Angela’s House Assisted Living of Imlay City, MI. Harold Edwin Finton was born June 23, 1934 in Flint, MI. He was the son of the late Daniel and the late Helen (Walker) Finton. He was preceded in death by his wife, Patricia Finton and his daughter Sondra Finton Moore.

Harold spent the early years of his life in a cabin his father built outside of Alpena before moving to Imlay City. He attended Imlay City Schools and graduated in 1953. Harold worked with his father and brother in Almont at the Hurd Lock factory. He then served in the Army as an MP in Japan from 1956-1958, upon return to the United States he served in the Army Reserve until 1962. The majority of Harold’s career was with General Telephone & Electric (GTE) as a telephone lineman. This would be the company he retired from.

Harold married Patricia June LePard, a lifelong friend, in August 1965. Harold and Patricia raised their family in Imlay City and remained there for life. Harold was an active outdoorsman, enjoying activities that ranged from hunting and fishing to water skiing and gardening. He was also very active at the St. Paul’s Lutheran Church, volunteering in all aspects of the church community. Upon retirement, he enjoyed traveling and playing cards with family and
friends.

He is survived by his son and daughter-in-law Michael and Michelle Finton of Grand Blanc, MI; along with his brother, Daniel Finton of Imlay City, MI. He is also survived by his two grandchildren, Lucas Finton and Mackenzie Finton.

In lieu of flowers, those wishing to make memorial contributions may consider giving to St. Paul’s Food for Families.

Please be sure to sign the online register book at www.muirbrothersfh.com to share your memories and condolences with the Finton family.