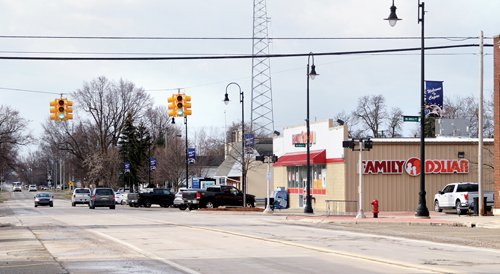 The village hopes grant dollars can help them make repairs to Main Street between Aldrich and Meier streets.

Category B funding is specifically for villages and small cities. The program, according to MDOT’s website, “was designed and created as a stop gap measure to provide additional road funding to the smallest communities in Michigan, particularly those with limited ability to fund road projects.”

Applications are due June 15 and only costs directly associated with roadway construction are eligible for funding. Up to 50 percent of those eligible costs, up to $250,000, are available through the grant program.

Award announcements are expected to be made in mid-August with funding available after October 1 for use in 2023.

Previously, Manager Travis Youatt said engineers estimated up to $1 million in repairs were needed for the street and suggested that multiple forms of funding assistance might be required. The project’s scope will stretch from Aldrich to Meier streets.

The condition of Main Street has been an issue for village officials for some time. The roadway was rebuilt as part of the Capac Downtown Development Authority’s 2007-08 Streetscape project but started to show deterioration within a few years. Engineers said then that not enough expansion joints, a failure of the old road base and other factors were to blame.

For a period of time, the village council considered taking legal action against the engineering firm and contractors who did the work, hiring an attorney to look into the matter. Eventually, they abandoned those efforts.

In 2017, the village secured a Rural Task Force Fund grant from MDOT that allowed them to resurface portions of Main Street immediately north and south of the downtown district at a cost of $381,500. The majority of that bill, $305,200, was paid for with state dollars and Capac was responsible for the remaining $76,300. That work was completed in 2018.