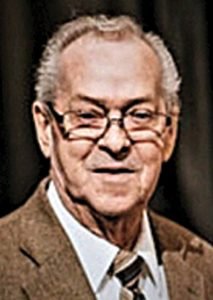 Ronald graduated in 1955 from Imlay City High School and he married Faith Hosking on May 25, 1974 in Auburn Hills. Mr. Herbert worked as a Pattern Repairman at Pontiac Motors Foundry Plant, retiring in 1998. Ron was an active and proud member of the UAW Local #653, he loved his Union Hall colleagues. The Herberts have been members of Hadley Community Church for almost 40 years.

Mr. Herbert spent hours working in his vegetable garden, it was his pride and joy. He always shared wonderful produce with his family, neighbors and friends… and Mr. and Mrs. Herbert canned many vegetables from the garden. Over the years, Ron raised chickens, pigs, cows, ducks, goats and geese. He loved working on the farm and working on his tractor, he was always working on his tractor! Ron enjoyed old cars, he had especially fond memories of the brand new ’57 Chevy he owned as a young man. He often got together for lunch with his classmates from Imlay City (Class of 1955). Ron was always happy to help friends, family and his neighbors. Most of all Mr. Herbert loved time spent with family!

He was preceded in death by his parents, George and Edith Herbert; son-in-law, Frank Duffie; and siblings, Elaine Babcock, Hazel Zuhlke and Pastor David Herbert.

Arrangements made by Muir Brothers of Lapeer. Please share condolences and memories with the family at www.MuirBrothersLapeer.com.