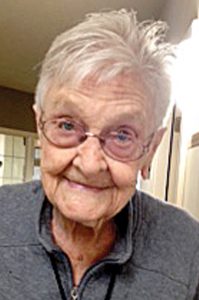 Esther Jager Eckel, age 100, of Imlay City (recently of Lapeer), MI died Saturday, April 2, 2022 at Devonshire Retirement Village of Lapeer, MI. Esther Mae Brandt was born July 19, 1921 in Holland, MI. She was the daughter of the late Almon and the late Anna (Nykamp) Brandt. Esther grew up and lived most of her life in Imlay City, MI. She attended Blacks Corners Country School. Esther worked on her family’s farm. She married Jake Jager in 1940. Jake preceded her in death in 1982. Esther married Melvin Eckel in 1990, he passed away in 2008.

She was a homemaker, raising her family. Esther was a member of Imlay City Christian Reformed Church. She enjoyed taking walks, traveling and camping.

She was preceded in death by her husbands, Jake Jager and Melvin Eckel; sons, Ronald Jager and Dean Jager; her parents, Almon and Anna Brandt; sisters, Gladys VanderPloeg, Myrtle “Myke” Vlieg, and Ruby Meyer; and her brothers, Bud, Lindy, Al, Larry and Bob.

The family will be available for visitation 10:30-11:30 a.m., Thursday, April 7 at Imlay City Christian Reformed Church.