Sharon Muir is Imlay’s ‘Citizen of the Year’

Chamber to present award at Gala on Saturday

IMLAY CITY — Family, faith and a fearless desire to serve seem to be the basic tenets of Sharon Muir’s life.

Married for more than four decades to husband Bob, with three successful grown children and a career path as varied as the changing seasons, Sharon’s exuberance for life and gratitude for the many blessings it’s brought shine through in her outlook.

Couple that with her diverse community service, Sharon’s commitment to looking forward—not backward—helped her earn the title of 2021 Imlay City Citizen of the Year. The award, given by the Imlay City Chamber of Commerce, is reserved for those who have demonstrated a lifetime of community service, volunteerism and advocacy on behalf of Imlay City and its residents.

Sharon will accept the award at this Saturday’s Gala at Castle Creek Golf Club, hosted by the Chamber.

“I was humbled—and quite surprised— to learn that I had been chosen as the 2021 Citizen of the Year,” Sharon says. “When I reflect on the legacy of service of my predecessors, I am honored to be included in their ranks.”

For the past 18 years, Sharon has served on the Imlay City School Board, holding the position of President for the past 13 years. 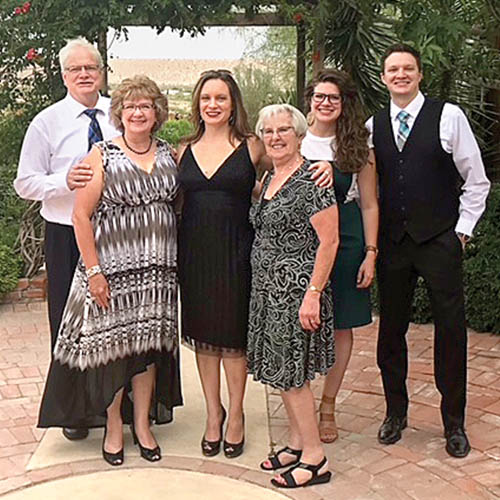 She’s always been drawn to serving in education—something in which she finds both satisfaction and humility.

“I believe that with rights come responsibilities,” Sharon says. “We have the right to live in this beautiful community, and with that comes the responsibility to become a contributor. It’s just a matter of finding your niche, and for me in large part it’s education.”

Sharon says it’s interesting to serve in a position where the trustees are not directly elected by those they serve—the community’s youth. The reward, she adds, is worth the responsibility.

“There is nothing better than shaking 150 hands in June as students celebrate that milestone of graduation,” she says.

Along with almost 20 years serving the school district, Sharon’s commitment to the community dates back to the 1980s, when she and Bob moved to Imlay City.

At the time, there was a need for ambulance volunteers, so she and Bob enrolled in an Emergency Medical Technician course together. Upon successful completion of the program, Sharon served for three years as a volunteer EMT, working the assigned 12 hour shifts.

“We wore pagers that alerted us to the need to respond for duty,” she muses. “We were paid a grand total of five dollars per shift—62 cents per hour—whether we were called to a run or not.”

Sharon turned in her pager when she learned she was expecting their first child—however, she continued to serve in other ways.

A longtime member of the Imlay City United Methodist Church, Sharon has served as the Praise Team Leader for 25 years. She’s also served as an adult chaperone for teen mission trips, and chaired the annual Women’s Advent Tea along with helping out in other ministries.

In the fall of 2020, Sharon was appointed as a trustee to the board of the Four County Community Foundation, where she enjoys helping serve and meet the needs of the community.

All the while, Muir has enjoyed a diverse career including working alongside her husband at the historic Muir Brothers Funeral Home in downtown Imlay City, as co-owner of Creations Floral on Third Street downtown, and as a substitute teacher at Imlay City Schools. She currently works as the Administrative Assistant at her church.

While she has enjoyed every one of her jobs, Sharon says the most gratifying was being a mom.

“My most rewarding job, the one that brought the greatest satisfaction, was being a stay-at-home mom while my children were young,” she says.

Despite keeping a very busy schedule, Sharon finds time for hobbies that could be considered as interesting and diverse as her career and community service history.

At the age of 57, she earned a class A skydiving license, which means she can independently skydive anywhere she chooses at any time.

Prior to the pandemic, Sharon took up bicycling and took part in 40- and 62-mile races from Texas to New Mexico with her eldest daughter, Kathryn.

She’s looking forward to resumption of the “Training Wheels” club, that was formed locally for those training for long rides or those who haven’t ridden a bicycle in a while. Though stalled by the COVID pandemic, Sharon says the club made great strides—or rather rides—before then.

Throughout it all—ups and downs included—Sharon says she remains grateful for every moment she’s been given.

Sharon, along with other Chamber award winners, will be recognized at the April 2 Chamber Gala at Castle Creek Golf Club. The event begins at 5 p.m. and includes dinner, dancing and more.

To purchase tickets to the Chamber Gala call 810-542-3256 or visit imlaycitychamberofcommerce.org for more information.