IMLAY CITY — A new siren will soon be installed at Lamb-Steele Park to alert residents of tornadoes and fires.

The new siren will replace the decades-old and obsolete siren located on the roof of the old fire hall.

He said the city is still waiting for parts necessary to install the new equipment. 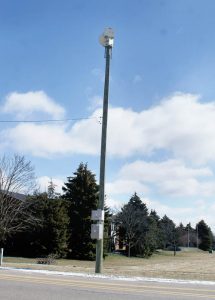 The new siren to be installed downtown will match the existing siren on S. Almont Ave. and Newark Rd. outside the Hickory Square apartment complex.

Chief Horton noted that many residents cannot differentiate between the sounds of a fire siren and tornado alert.

“Residents need to be able to recognize the tornado siren tone and what to do,” Horton said. “When you hear a long (3 minute) constant high siren tone, that is a tornado alert.

“An alert is a warning to take cover because a tornado has been spotted in the area,” he said. “A ‘tornado watch’ can be issued by weather services, which means weather conditions are right for a possible tornado.

“No siren will sound for a tornado watch.”

Horton added that “take cover” means: (1) get to the basement or the lowest point in the residence: (2) stay away from windows on the floor next to the wall pointing south; and (3) have access to a flashlight and cell phone.

Chief Horton said the city’s two tornado sirens, including the one at S. Almont Ave. and Newark Rd. near Hickory Square Apartments, will be tested at 1 p.m. on the first Saturday of each month from April thru October.

Horton pointed out that the city’s sirens can sometimes be accidentally triggered.

“Occasionally, the sirens may go off for no reason,” he said. “They are operated on a radio frequency that can sometimes be tripped by weather and atmospheric conditions.”

Despite possible hitches, Horton said the health and safety of Imlay City residents is of the highest priority for Imlay City officials and the Imlay City Fire Department.