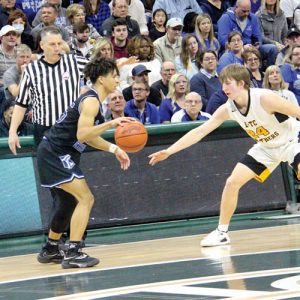 Tom Mailloux watches the action unfold last Saturday in the Div. 4 title game between Tri-Unity and Ewen Trout Creek at the Breslin Center in East Lansing.

The Breslin Center, in East Lansing, is where the action unfolded.

It marked the second time Mailloux has called a title game. He also drew the assignment for the 2005 Class D final, where Detroit Rogers took advantage of a four-point play during the closing seconds of overtime to pull out a 71-68 victory over Bellaire.

In Saturday’s championship clash, Wyoming Tri-Unity Christian jumped out to a 16-11 advantage after one quarter was over with.

The second quarter saw Ewen Trout Creek bounce back with a 19-7 edge, good for a 30-23 lead at the half.

Following the break, Wyoming Tri-Unity Christian struck with a 9-6 third quarter advantage. That trimmed their deficit to 36-32 at the time.

They then followed it up with an 11-7 fourth quarter edge, making it a 43-43 ballgame at the end of regulation play.

Wyoming Tri-Unity Christian then outscored Ewen Trout Creek 13-2 over the next four minutes, leaving with a 56-45 win to their credit.