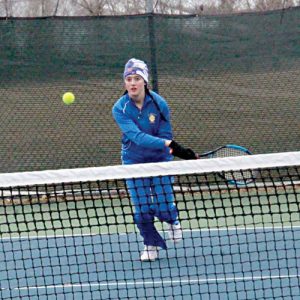 Imlay City’s Emma Kent gets ready to return a shot during her second singles match with Flint Kearsley last week.

As far as doubles play was concerned, Drew Wetzel and Lily Makedonsky dropped a 0-6, 1-6 verdict to Emily Schanick and Victoria Griffith at first doubles; Rachel Lauwers and Maggie Muehleisen incurred a 0-6, 1-6 second flight setback; Vivian Graver and Karter Wetzel absorbed a 2-6, 0-6 setback to Allyson Palka and Allysa Boven at third doubles; plus Ginger Gottler and Winter Muxlow wound up with a 0-6, 2-6 fourth flight loss to Avery Roberts and Kylee Pake.