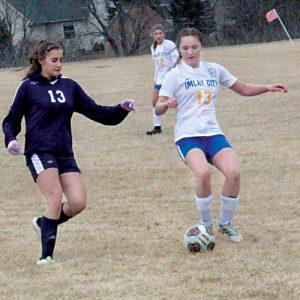 Imlay City’s Mary Kaminski (R) looks to keep the ball away from a Yale defender in their BWAC soccer clash Wednesday.

With the outcome, Imlay City goes to 1-0 overall and as far as BWAC clashes are concerned.

Jessica Peters supplied the game-winning Imlay City goal, that coming during the second half of play.

Jenna Peters set up the tally.

Ashley Hickmott got the win in goal for Imlay City. She was credited with three saves.