Fire marshal, investigators in search of potential cause

DRYDEN — An apparent explosion and fire at Victoria Meadows mobile home park left four people dead on Monday morning. As of Tuesday, investigators and medical examiners were still working to confirm the identity of the victims. Authorities confirmed that two females—one in her 80s and the second in her 30s—reportedly lived there along with two teenaged children.

Dryden Police Chief Shawn Peters said Dryden Township police and firefighters were dispatched at around 5:07 a.m. on March 21 to the 3700 block of Pheasant Lane, where the explosion had occurred.

“Some neighbors told us they heard a loud boom,” said Peters on Monday morning. “It’s too early in the investigation to provide specific information.”

In an interview with media outlets later that day, Dryden Township Fire Chief Mark Hagemeister said that there was some evidence of “some sort of explosion.” 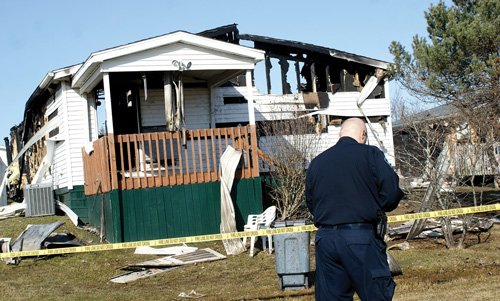 A Michigan State Police fire investigator works on the scene of
a fatal explosion and fire that occurred Monday morning in Dryden.

According to reports, Consumers Energy employees were on scene following the incident. Earlier in the day, Peters also noted that one of the adults in the home was believed to use oxygen.

In a press release issued Monday evening, Peters detailed the response to the incident. Police Officer Morgan Thompson, one of the first responders on the scene, advised Central Dispatch that flames were already through the roof of the single-family residence when she arrived.

Firefighters from Dryden and neighboring Almont fought the fire, not knowing if the home was occupied. After the flames had subsided, first responders found the victims’ bodies in the home.

“At this time, the Michigan State Police Fire Investigation Unit was contacted to investigate the scene,” Peters said. The Lapeer County Sheriff’s Office and Lapeer County Medical Examiner were also called to the scene.

“Autopsies are currently being conducted by the Lapeer County Medical Examiners Office at the Michigan Institute of Forensic Science and Medicine,” Peters noted.

He said that investigators from multiple agencies will be “working diligently to uncover all of the facts of the case.”

“Regardless of the outcome of the investigation, this incident is without question a tragedy as lives have been lost,” Peters said.