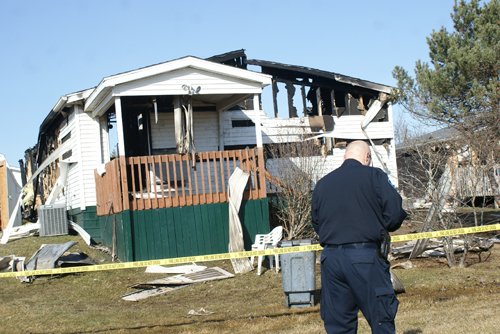 A Michigan State Police fire investigator works on the scene of a fatal explosion and fire that occured Monday morning in Dryden.

Fire Marshal, investigators at site in search of cause

Dryden Police Chief Shawn Peters said Dryden Township police and firefighters were dispatched at around 5:07 a.m. on March 21 to 3750 Nash Lane, where the explosion had occurred.

Peters said an active investigation was in its early stages and that the fire’s origin and cause were unknown.

“We don’t have a lot of details yet,” Peters said. “All we know is four people were inside the house at the time of the explosion and they are all deceased.”
He added that the identies of the victims have yet to be released; though it is believed an elderly woman, possibly on oxygen, recently moved into the home.

“Some neighbors told us they heard a loud boom,” said Peters. “It’s too early in the investigation to provide specific information.”

“Regardless of the cause,” he said, “This is is a tragedy for those involved and for our community.”

He acknowledged the Almont Fire Department for providing mutual aid at the scene.