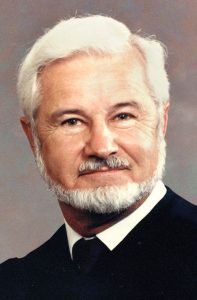 The Honorable Judge Clayton Edward Preisel, age 95, died on Sunday, March 13, 2022, in Attica, MI. He was surrounded by loved ones as he passed peacefully in the comfort of his own home. Judge Preisel was born in Warren, MI, on January 29, 1927, to the late Edward and Cora (Parker) Preisel. Clayton was the eldest of two boys – with a younger brother, Graydon. The Preisel family later moved to the local area, and Clayton graduated from Imlay City High School in 1945. Upon graduation, he enlisted in the U.S. Marine Corps to serve his country in WWII. Clayton was honorably discharged in 1946, and enrolled at Michigan State University where he earned a B.A. in Agricultural Education.

After graduation, Judge Preisel moved to Carson City, MI, and began teaching. After four years, he returned home to Imlay City, where he continued his teaching career. He taught in Imlay City until 1969, and spent the final two years of his tenure there as both a teacher and a school administrator, serving as assistant superintendent. During this time, Judge Preisel also doubled as a student, obtaining a M.A. in Agricultural Education in 1957, and, in 1968, receiving a Juris Doctorate degree from the Detroit College of Law.

Upon receiving his law degree, Judge Preisel entered into private practice with his partners Dick Bahls and Bernard Penzien, where he stayed until 1982, when he was elected to serve as Lapeer County Probate Judge. He held this position until he reached the mandatory age of retirement and completed his final term in 2000. He would spend a number of years thereafter serving as a visiting judge for Genesee and Tuscola counties. During his time on the bench, Judge Preisel was viewed as a leader and an inspiration to those around him.

Judge Preisel always found time to partake in community service. His involvement included serving on the Imlay City Board of Education (1969-83), establishing Kids in New Directions (KIND) and the Lapeer County Community Foundation of Greater Flint, 4H, the Lions Club, the United Way, Big Brothers/Big Sisters, the Lapeer County Bar Association, and a multitude of other organizations. His dedication to the local community earned him the Imlay City Chamber of Commerce’s Citizen of the Year award in 2013. Clayton was very active in the farming community as he spent nearly 70 years raising Black Angus cattle, purebred Russian Arabian horses, and growing feed crops like hay, corn and soybeans on his 110 acre farm that stretched along M-21.

Those wishing to make memorial contributions may direct them to the Preisel Family Scholarship Fund through the Four County Community Foundation.

Please be sure to sign the online register book at muirbrothersfh.com to share your memories and condolences with the Preisel family.