Suspect shot and killed after firing at officers in Burnside

LAPEER COUNTY — Two deputies, both injured while attempting to serve an arrest warrant last week, have been released from the hospital.

Lapeer County Undersheriff Jeremy Howe confirmed on Monday that both officers are “doing well” after having been treated by hospital staff. 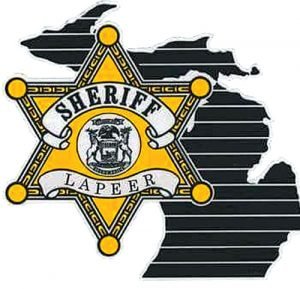 The sheriff’s office has thanked the community for their outpouring of support following the incident that injured two deputies.

The deputies, both in uniform, and a detective from the Lapeer County Sheriff’s Office were attempting to serve an arrest warrant in Burnside Township on Wednesday, March 9, when the suspect allegedly opened fire on the deputies, striking one of them several times.

The 47-year-old Imlay City man, Robert Charles Raymond, was then shot and killed after the second deputy returned fire. That’s according to the investigation and subsequent press release issued by the Michigan State Police who are handling the incident at the request of Sheriff Scott McKenna.

State Police Sgt. Steven Moore reported that the homeowner of the residence allowed the deputies to check the premises for the suspect upon their arrival.

“Upon opening the door of a detached outbuilding, the suspect fired upon them with a gun, striking one deputy multiple times,” Moore wrote in a press release.

“The other deputy returned fire, striking the suspect.”

Raymond was pronounced deceased at the scene. Police were looking to serve Raymond with a felony criminal sexual conduct
warrant.

The officer who was shot—and has since been identified as Deputy Mike Tappen— was transported to Marlette Hospital and then flown by helicopter to Hurley Medical Center in Flint where he was listed in stable condition before being released.

The other deputy was not shot but was treated for non-life threatening injuries at a local hospital before being released.

The shooting remains under investigation.

In a public post about the incident, Lapeer County Sheriff Scott McKenna thanked the community for the outpouring of support in the aftermath of the shooting.

“Myself and this entire Sheriff’s Office have received hundreds of calls from citizens and businesses in Lapeer County with prayers and offering of help to the injured deputies and our men and women in uniform. I cannot put into words how much we appreciate each and every one of you for kind words and thoughts in such a tough time,” McKenna said.

He thanked all the first responders, including 911 dispatchers, for their help.

“It is always a horrible day when you hear radio traffic of an ‘officer down,’ but to see how everyone comes together to help makes me proud to work in this county,” he said.

On Monday, Undersheriff Howe confirmed that both deputies have been placed on paid administrative leave until the MSP’s independent investigation is complete.

“The Lapeer County Sheriff’s Office greatly appreciates all the well-wishers and the support that has not only been given to our injured deputies but to our entire office,” Howe added.

“We are truly lucky to serve in the best community in the country.”

A benefit breakfast for Deputy Tappen will be held Saturday, March 26, from 8 a.m. to 3 p.m. at the Krave restaurant in Lapeer. Proceeds from the breakfast will be given to the Tappen family. Additionally, donations can be directed toward an account established at Choice One Bank.