Dryden boys wrap up their season 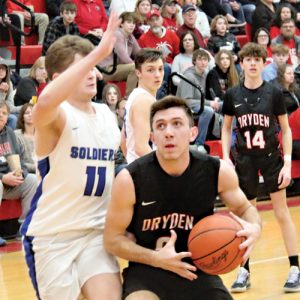 DRYDEN — Dryden wound up on the losing side of a 58-33 verdict to Genesee Christian (rated tied for ninth statewide) in a Division 4 boys’ district semifinal confrontation it hosted last Wednesday night.

With the decision, Genesee Christian improves to 18-4. Dryden sees a 10-11 campaign draw to a close.

In Wednesday’s confrontation, Genesee ended the initial quarter ahead of Dryden 12-9.

When the action resumed, Genesee Christian was able to seize command. Aided by a 21-3 third quarter edge, the Soldiers padded their cushion to 47-22 with 24 minutes gone.

Genesee Christian and Dryden then hit for 11 points apiece the rest of the way, giving the former a 58-33 win at night’s end.