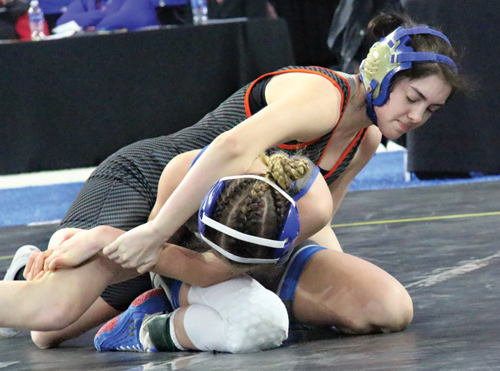 Almont’s Maria Stanton squares off versus a mat counterpart at the MHSAA Girls Wrestling Individual State Finals in Detroit.

She then went to 2-0 with a 5-0 quarterfinal win against Chippewa Hills foe Maikia Wittig (19-17), the eventual sixth-place finisher.

That placed her in Friday’s semifinals where Grand Ledge’s Tricia Pyrzewski (15-3) provided the opposition. Their battle ended with Pyrzewski, the eventual second-place finisher, prevailing by a pin with 3:32 gone.

Those outcomes advanced Stanton to Saturday’s action. It was there she squared off versus Chippewa Hills counterpart Natalie Gibson (30-16).

When the final scores were added up, Gibson had pulled out a 3-2 victory. The Chippewa Hills grappler would go to place fourth.

With her performance, Stanton earned All-State accolades (reserved for the top-eight finishers in each weight class).