IMLAY CITY — Talented artist Hunter Pope continues to turn heads in the art world—and in the world of sports. 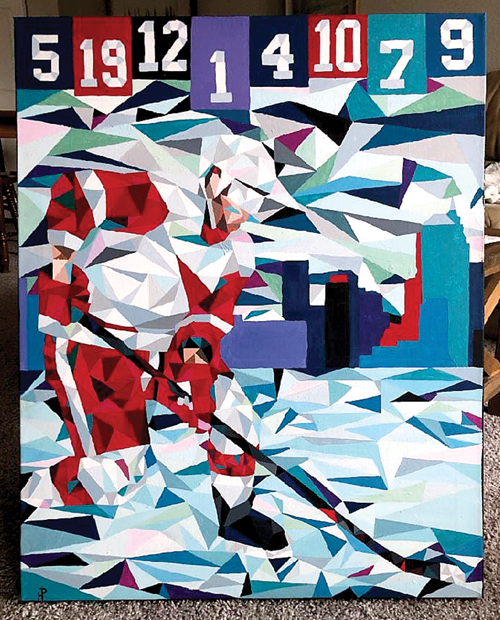 Hunter Pope’s winning submission ‘Wings Flying on Glass’ will be posted near the Rehmann Club at Little Ceasar’s Arena.

Rehmann, a financial services and advisory firm, partnered with the Red Wings to launch the contest in November of 2021. Artists were invited to submit in two categories—adult and youth—and were tasked with creating a 24” by 30” piece that is frame-able. Submissions could include drawings, paintings, etchings or other types of two-dimensional art.

Judges evaluated the creativity, originality and theme, and representation of historical numbers in Red Wings history in each submission, and Pope’s came out on top in the adult category.

His entry entitled ‘Wings Flying on Glass’ depicted numbers from retired jerseys, a hockey player in red with the Detroit skyline as the backdrop. Triangular elements are part of the piece, which Pope describes as resembling broken glass or ice.

“Hunter’s piece was a high-quality work of art that beautifully captured the essence of what the judges were looking for in this contest,” said Chris Rosmarin, a principal at Rehmann and one of three judges on the panel in a press release. “Seeing the Paint by Red Wings Numbers contest come to a close is bittersweet, but it has demonstrated just how beloved Michigan’s national hockey team is by fans from all over.”

For his part, Pope says he became hooked on hockey thanks to his girlfriend.

“I have my significant other and her family to thank for introducing me to the adrenaline rush that is watching hockey,” Pope said in a press release. “I also want to thank Rehmann and the Red Wings for providing this opportunity and supporting art in our community. I am honored and forever grateful to everyone who has supported my art—it is all of you who truly inspire me.”

Fans of Pope’s work would argue that the pendulum swings both ways—his artwork is both inspired and inspiring.

A winner of former Rep. Candace Miller’s 10th Congressional District Art Contest, Pope’s work is featured all around downtown Imlay City. In 2016, Pope was chosen as a commissioned artist by the Imlay City Downtown Development Authority for its Art Initiative.

His paintings can be found posted outside of buildings including the Post Office and EMS station on Third Street, at the Ruth Hughes Library and other buildings on Almont Avenue, and inside City Hall on Main Street.

Pope says his inspiration comes from his childhood, his family and friends, his hobbies and nature.

His ‘Wings Flying on Glass’ painting will be displayed near the Rehmann Club at Little Ceasars Arena. Along with the $5,000 cash prize, Pope took home four Red Wings tickets.