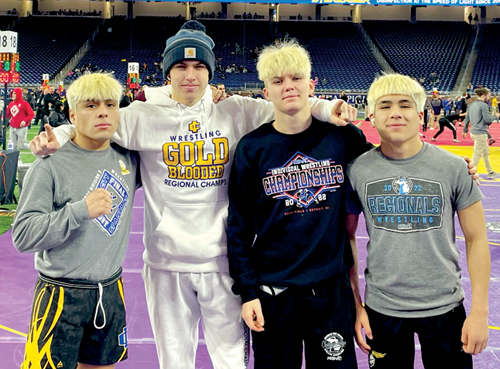 The tournament was contested last Friday and Saturday at Ford Field in Detroit.

He then improved to 2-0 with a 5-4 quarterfinal victory over Kingsley’s Gavyn Merchant (38-6), the eventual fourth-place finisher.

D’Ambrosio squared off next versus Clinton’s Connor Busz (50-3). Their Friday semifinal battle drew to a close with Busz, who would go on to place second, ahead 4-3.

That placed D’Ambrosio in Saturday’s consolation semifinal round. It was there he registered a 5-4 triumph against Dundee’s Kyle Smith (35-10), who would go on to notch a fifth.

D’Ambrosio then was scheduled to face Kingsley’s Gavyn Merchant for third place honors next. Their encounter concluded with the Imlay City grappler prevailing via forfeit.

For his effort, D’Ambrosio garnered All-State plaudits (given to the top-eight finishers in each weight class).

D’Ambrosio ended the season with a 48-4 mark.

He then went to 2-0, registering a 7-6 quarterfinal triumph against Gladstone’s Austin Solis (30-4).

Rojas met Alma’s Fabian Facundo (40-4) next. Their Friday semifinal clash wrapped up with Facundo, who would go to place second, pinning him with 4:36 gone.

That placed Rojas in Saturday’s consolation semifinal round. It was there he notched a 12-5 win against Grand Rapids Catholic Central’s Tyler Geer (34-11), who would go on to obtain a fifth.

With his performance, Rojas claimed All-State accolades (awarded to the top-eight finishers in each weight division).

Rojas wrapped up the year with a 48-6 record.

Julian Rojas provided Imlay City with a fifth at 130 pounds.

Rojas (44-5) started his stint at states Friday when he was pinned by Constantine’s Eric Demas (33-14), the eventual sixth-place finisher, with 2:56 gone.

He followed it up Saturday with a 6-4 triumph against Algonac’s David Clemons (38-17).

Rojas then was pinned by Yale’s Seth Woolman (53-7), the eventual fourth-place finisher, with 1:27 gone.

That placed him in the fifth place match against Kingsley’s Eric Demas (36-16) This time around it was Rojas then notched a 6-4 win against Demas.

For his effort, Rojas garnered All-State plaudits (given to the top-eight finishers in each weight class).

Rojas ended the season with a 58-7 mark.

Anthony D’Ambrosio added a seventh to Imlay City’s cause.

He then went to 1-1 with a 4-3 quarterfinal setback to Hart’s Mason Cantu (49-2), the eventual second-place finisher.

D’Ambrosio followed that up Friday with an 8-2 win against Portland’s Isaiah Pelc (37-10).

He then dropped a 7-3 verdict Saturday to Swan Valley’s Cody Ueberroth (49-3), who would go on to place fourth.

That meant D’Ambrosio would face Parchment’s Dylan McLean (47-5) for seventh place honors next. Their battle wound down with McLean picking up a 10-1 victory.

With his performance, D’Ambrosio claimed All-State accolades (awarded to the top-eight finishers in each weight division).

D’Ambrosio wrapped up the year with a 45-10 record.

He then lost his next two bouts Friday , dropping a 15-0 quarterfinal outcome versus Ovid-Elsie’s Talan Parsons (38-1) and bowing out when he was pinned by Freeland’s Joe Klopf, who was 31-5 when they met, with 4:46 elapsed. Parsons wound up the eventual champion and Klopf would go on to claim a seventh-place finish.

Land completed the season with a 42-11 mark.

He then bowed out later that day with an 11-4 loss to Williamston’s Luke Chambers, who was 35-15 when they met.

Perry finished the campaign with a 34-17 record.

Torres (41-10) began his stint at states Friday with a 6-4 loss to Watervliet’s Eli Marshall, who was 42-3 when they collided. Marshall would go on to earn a second-place finish.

He then ended his tournament run when he was pinned by Chesaning’s Brenden Quackenbush, who was 20-7 when they met. with 49 seconds gone.