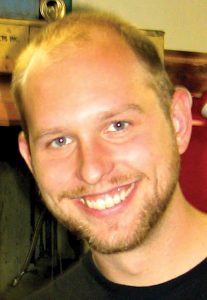 Derrick Miller, age 37, of Imlay City, MI died Wednesday, March 2, 2022 at his home in Imlay City. Derrick Paul Miller was born February 11, 1985 in Lapeer, MI. He was the son of Alan and Shannon (Woodruff) Miller. Derrick grew up in Attica and spent his high school years in North Branch. He was a graduate of North Branch High School, Class of 2003. He also attended Lapeer County Ed-Tech where he studied carpentry and residential construction. Derrick has been with his significant other, Terri Lynn Phillips, for nearly 20 years. These most recent four years, Derrick and Terri have been living in Imlay City.

He has worked for four years as a roofer for DuPont Roofing in Imlay City and before had been a heavy equipment operator at Novak’s gravel pit. Derrick enjoyed playing basketball and football with his children and the neighborhood children. He was a big supporter of Imlay City football and encouraged his children to participate in the program. Derrick was an outdoorsman; as well as sports, he enjoyed hunting, trapping, and spear fishing.

The family will be available for visitation 10-11 a.m. Wednesday, March 9 at Muir Brothers Funeral Home of Imlay City.

Please be sure to sign the online register book at www.muirbrothersfh.com to share your memories and condolences with the Miller family.