BERLIN TWP. — Fighting fires and responding to traffic accidents are part and parcel of being a rural firefighter and/or Medical First Responder (MFR).

In Berlin Township, those duties are left to a small group of paid volunteers who answer the call at all times of day and in any kind of weather. 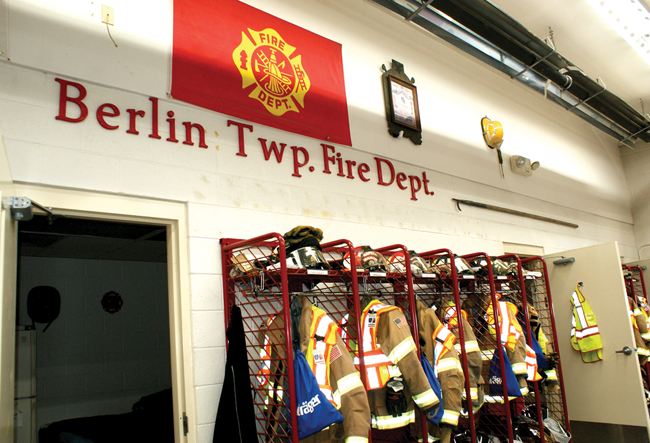 Berlin Township firefighters’ helmets and turnout gear have come to frequent use in recent days, weeks and months. Fire Chief Dave Hartway says the department is in need of some more recruits.

Fire Chief Dave Hartway believes township residents are fortunate to have such a well-trained and dedicated coterie of firefighters and emergency responders.

“Our current roster is 20, but we could definitely use more people,” Hartway said. “Fortunately, we have a couple new recruits who are now in firefighter school in Lapeer.”

Hartway said Berlin Township firefighters respond to an average of 3-12 calls in any given month.

Those calls include fires, accidents and mutual aid responses to neighboring municipalities.

Hartway said his firefighters have been particularly busy in recent weeks, including a pair of structure fires on a recent weekend.

On Saturday, Feb. 26, Berlin firefighters responded to the 15000 block of Schultz Road, where an outbuilding had caught fire.

“That fire was in a 15-foot-by-30-foot outbuilding and was fully engulfed by the time firefighters arrived.” Hartway said the cause of the fire remains unknown.

On Sunday, Feb. 27, firefighters responded to the 16000 block of Burt Road for a chimney fire.

“Fortunately, our firefighters were able to extinguish the fire and clean out the chimney flue. But, there was a little smoke damage.”

The Berlin Twp. Fire Dept. has been the beneficiary of community support, including at the polls.

In November of 2020, residents approved a 1.5-mill special assessment to pay for new equipment and apparatus.

The 10-year levy runs through 2030, and is expected to raise an additional $1.5 million during that time frame.

According to the 2020 census, Berlin Township has more than 3,200 residents living in an area that spans about 37 square miles.

The Berlin Township Fire Department was founded in 1974, following a rash of house fires; some of which were of a suspicious nature.