GOODLAND TWP. — The California company hoping to create a solar development has formally submitted their plans to Goodland Township.

Goodland Supervisor Ron Cischke said they’ve forwarded the application to their engineer and planner, the Lapeer County Road Commission, Construction Code Authority and other such entities for their review.

“Once we get their responses back, we’ll set a public hearing,” Cischke said. 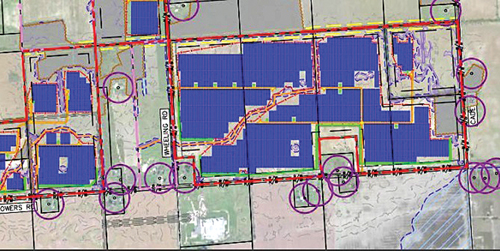 Maps on the project’s website show the proposed location for solar panel arrays, seen here in blue. This section of the map depicts the southeast boundary of the project.

He said that all property owners within 300 feet of all the participating parcels will be notified by mail of the hearing once it’s scheduled and the hearing notice will be posted publicly and printed in the newspaper. He expects that a date will be set for sometime in April.

The proposed project is smaller in scope area-wise than what Orion had previously planned. The company said earlier the solar development would encompass approximately 2,800 acres but that number was bumped down to 1,713 acres within the permit boundary. Hoffman said that 826 of those acres will include actual solar facilities with the other 887 acres remaining open space.

“We have adjusted our layout a number of times after we held our open house meeting in October and again after an earlier Planning Commission meeting to reflect some feedback we heard from citizens,” Hoffman said.

The development’s newest map calls for constructing a series of solar arrays with a 100 megawatt capacity on land between Bowers and Shaw roads in the eastern portion of the township.

Per Goodland Township’s ordinance, solar energy facilities are allowed as a special land use and that request will go first before the township’s planning commission. The special land use application requires Orion to submit a project description, anticipated construction schedule, decommissioning plans and a complaint resolution process.

If that permit is approved, the project moves on to the site plan review stage and that’s when additional documentation, like project area boundaries and the location of all proposed structures and access roads, will be examined.