2028 could see a boulevard by Kroger Plaza in Imlay City

GOODLAND TWP. — Monday’s (Feb. 28) M-53 Corridor Committee meeting at the Goodland Township hall was essentially a reprise of its previous meeting on Oct. 25, 2021.

While there was abundant discussion related to traffic flow and safety issues along M-53, representatives from the Michigan Dept. of Transportation (MDOT) had little new information to report.

MDOT representatives Ryan Whiteherse and Ryan McDonnell were present to respond to questions from the committee and audience members, which included local village and township officials, along with interested residents and and stakeholders.

Both Whiteherse and McDonnell stated that there are currently no plans for upgrades along the M-53 corridor from Romeo in Macomb County, north to Imlay City. 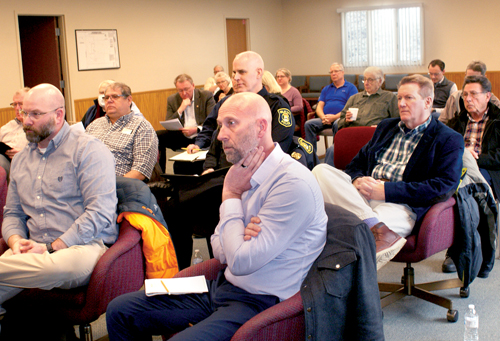 Lapeer County public officials and residents heard on Monday that any hoped-for traffic signals and road upgrades on M-53 are likely years away from coming to fruition.

The section of highway between Newark Rd. and the Kroger Plaza has been the site of numerous minor and serious crashes in recent years, including fatalities.

McDonnell reminded that MDOT had conducted a 2019 traffic study that determined the section of highway in Imlay City did not meet the criteria for installation of another signal.

“There is no question that traffic flow on M-53 is very busy during the rush hours,” McDonnell said, “However, it’s much less during the rest of the day.”

He said MDOT determines signal locations based on traffic flow and ‘correctable’ crashes that could have been avoided if there was a signal,” he added. “If we put up a signal in the wrong places, it can make matters worse.”

He noted that there have been instances when MDOT installed signals which were later removed because they resulted in more crashes.

Ryan Whiteherse offered some hope that progress will be made in the coming years.

He pointed out that MDOT has a “conceptual plan” for construction of a boulevard in front of the Kroger Plaza in Imlay City in 2028.

If constructed, the boulevard would allow motorists to exit the plaza onto northbound M-53, and then access southbound Van Dyke via the boulevard.

“That would eliminate left turns out of the Kroger Plaza, which should reduce the number and severity of crashes,” Whiteherse said. “That would allow for a steady flow of traffic in that area, while addressing safety concerns along the corridor.”

However, that proposal has been tabled for the time being.