IMLAY CITY — The Imlay City wrestling team concluded an outstanding 29-6 campaign, advancing all the way to the Division 3 state semifinals before seeing their postseason path halted.

Wings Event Center, in Kalamazoo, hosted the tournament which was contested last Friday and Saturday.

“What a great event it was for us,” Imlay City Coach Tony D’Ambrosio commented. “I don’t think anyone could have a bad weekend at a team state wrestling finals,” he noted.

“For these young men to come together and and hold each other accountable it was a special season to see. It contributed to the quarterfinal win over Hart. To be in a semifinal dual and watch these kids compete at the highest level is something we will never forget. The parents, administration, coaches and community came together in a loving way to make this trip special for the team.”

Imlay City, the fourth seed, opened their tournament stint Friday afternoon with a 45-24 win at the expense of fifth-seeded Hart (30-5). 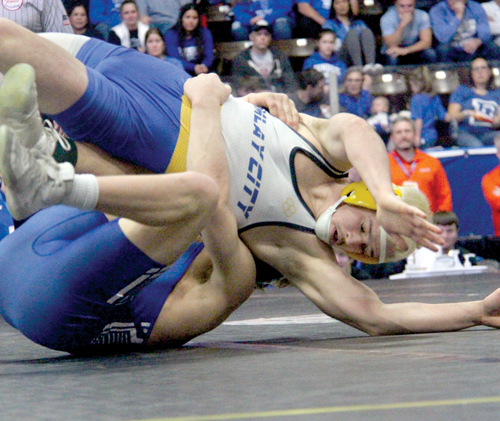 Imlay City’s Aaron Evely looks to escape the hold of a Dundee counterpart in semifinal action at the Division 3 team tournament last Saturday.

That battle got underway with Hart’s Julian Vasquez picking up a 6-0 victory over Imlay City’s Cristian Rager at 112 pounds.

When those bouts concluded, Imlay City had jumped out to a 21-3 advantage.

Hart’s Zane Thomas then answered with a pin of Imlay City’s Aaron Evely with 1:57 elapsed. His outcome made it 27-14, Imlay City.

The 171-pound weight class ended with Hart’s Alex Hicks pinning Imlay City’s Brady Vanderploeg with 3:40 gone. That made it 27-20, Imlay City, at the time.

Hart then countered with a 15-2 win by Leo Guaadarrama over Latham Perry at 215 pounds, bringing them to within 33-24.

However, that would prove as close as they got. Heavyweight Chris Torres followed it up with a pin at the 38-second mark of his encounter versus Ivan Lara and Tanner Land pinned 103-pound foe Ivan Lara with 1:47 gone.

That enabled Imlay City to prevail via a 45-24 count.

The following afternoon Imlay City would not fare as well when the final scores were added up, bowing out with a 74-5 semifinal loss to top-seeded Dundee.

Imlay City lost one team point due to unsportsmanlike conduct.