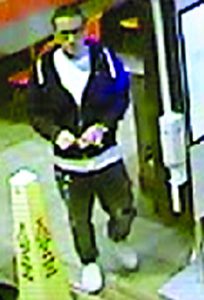 IMLAY CITY — Imlay City police are seeking information regarding the identify of a man who allegedly assaulted another man at the Imlay City’s McDonald’s restaurant on February 21.

Police Chief Brett Selby reported that at around 8 p.m., officers responded to the restaurant at 635 S. Cedar St. (Van Dyke) in Imlay City.

Selby said that upon arrival, officers spoke with a male victim who said he had been assaulted after being grabbed by the throat and slammed to a table.

The victim identified the suspect as a white male in his late 30s or early 40s, who had tattoos on both sides of his neck.

“The suspect accused the victim of ‘whistling’ at his daughter,” Selby said. “He also confronted another individual who was with the the assault victim. But he stopped short of assaulting that person.”

Anyone who witnessed the assault, or may have information regarding the assailant’s identity, is asked to call or leave an anonymous tip at the Imlay City Police Dept. at 810-724-2345.