With the outcome, Imlay City (28-5) continues their postseason path this Friday in a quarterfinal match at the Kalamazoo-based Wings Event Center. There they will square off versus Hart (30-5) at 4:30 p.m.

“I am very proud of our guys and how hard they worked over the course of the season,” Imlay City Coach Tony D’Ambrosio commented. “They believed in themselves and each other,” he noted. 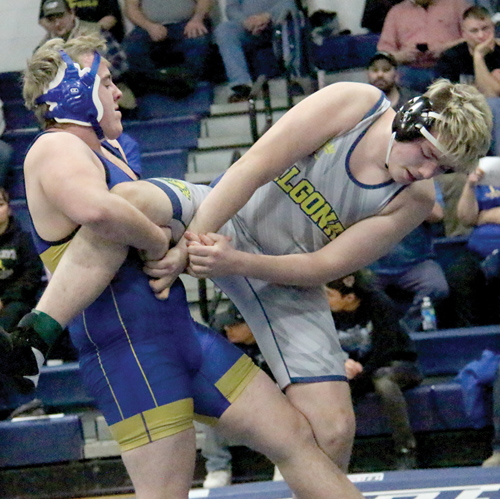 Imlay City 215-pounder Latham Perry grabs ahold of the leg of his Algonac counterpart in their regional clash in Yale.

“It was a historic night for Imlay City wrestling winning a regional and making the team finals. We knew it would be a tough task with fourth-ranked Algonac unbeaten in the league coming with a dual win over fifth-rated Richmond earlier this season. For us to come away with back to back wins over the number four and number five ranked teams is a testament to the determination the guys have.”

In the championship encounter, Imlay City jumped out to a 15-0 advantage with wins in the first four bouts. Conner Wildie picked up 2-0 victory over 135-pound foe Aiden Bergeon; Christopher Galiana registered an 8-6 triumph against Wyatt Peters at 140 pounds; Anthony D’Ambrosio pinned 145-pound counterpart Tristen Weigand with 20 seconds gone; and Herrera notched a 9-2 win over Jackson Lacek at 152 pounds.

That made it 25-15, Richmond with four matches remaining.

Imlay City then bounced back when 103-pounder Tanner Land pinned Cooper Honnold with 53 seconds gone, trimming his team’s deficit to 25-21.

Richmond then answered with a pin of their own when Noah Harris stopped Christian Rager 12 seconds in to their 112-pound battle.

That left Richmond holding a 31-21 lead.

Imlay City’s Dominic D’Ambrosio then won the 119-pound weight class by void and Cristian Rojas followed it up by securing a pin against 125-pound counterpart Jacob Fink with 25 seconds elapsed.

That left Imlay City clinging to a 33-31 edge with one match, at 130 pounds, remaining.

It was there Imlay City’s Julian Rojas and Richmond’s Connor Bergeon collided.

When the final scores were tallied, Rojas had clinched the regional title for Imlay City on the strength of a 15-1 outcome.

Imlay City reached the title clash with a 37-30 victory over fourth-rated Algonac.

Anthony D’Ambrosio provided Imlay City with a win by major decision, accomplishing the feat with a 15-6 outcome versus Evan Hiltunen at 145 pounds.

Latham Perry was the other Imlay City grappler who prevailed. Perry notched a 2-1 tiebreaker victory over 215-pound foe Chris Brooks.

Imlay City lost one team point when they failed to check in properly.