Ruth Hughes Auction is ‘one for the books’

Library Auction Coordinator Cynthia Stroebel could not have been more pleased with the turnout and quality of items going up for bids at this year’s fundraiser.

“For those who participated, the Love Your Library Auction is a much-anticipated event,” Stroebel said. “It was awesome to be able to host the event in person again after a year hiatus because of the pandemic. 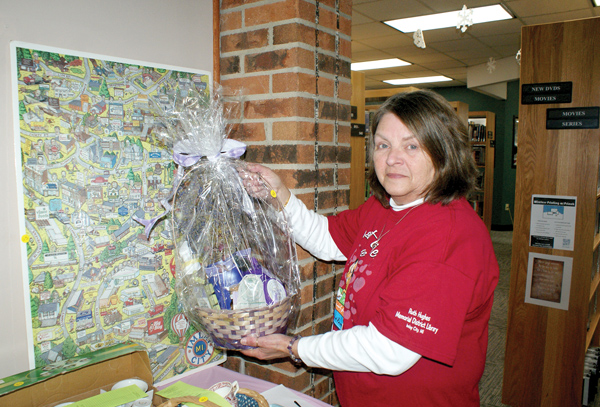 Ruth Hughes Library staff member Diane Willick is pictured with one of the more than 200 donated items that went up for bids during the library’s annual auction/fundraiser on Feb. 2-9.

“Our auction is so much more than just a fundraiser for our wonderful library,” she continued. “Many people plan and give consideration to which treasure(s) they donate or create for the event.”

Stroebel noted that one of this year’s first bidders declared that, “This is going to be fun” as she walked toward the plentiful displays of unique auction items.

“Our donors come from both the local business community and from many of our frequent patrons,” Stroebel said. “The community really comes out to support this event.”

She acknowledged the library’s loyal patrons and the many Imlay City community members and neighbors that volunteered.

“One neighbor got ‘wrangled’ into helping by just innocently walking her dogs down an alley the morning of set-up,” Stroebel said. “What made it even better was that she brought along the person she was walking with.”

Stroebel added that local students and young children took part in making the auction a success.

“Even some of the youngest in our town helped with the work,” she said. “An 11-year-old neighbor of mine, Scarlet King, helped for hours and hours.”

Stroebel pointed out that Ruth Hughes staff incorporated a different format on the auction’s final day to ensure ‘social distancing’ and limit the total number of people in the library at one time.

“All went smoothly,” she said. “We are so lucky to have such a great staff, patrons and the community at large.

“That’s what makes the auction such a wonderful community event year after year.”

Though she did not have an exact number, Stroebel estimated that this year’s auction raised “thousands of dollars” for the library.

“The money raised from the auction helps to fund programs such as our summer reading program for kids and many other activities we host during the year.”

For further information, or to make a donation to the Ruth Hughes Memorial District Library, call 810-724-8043.