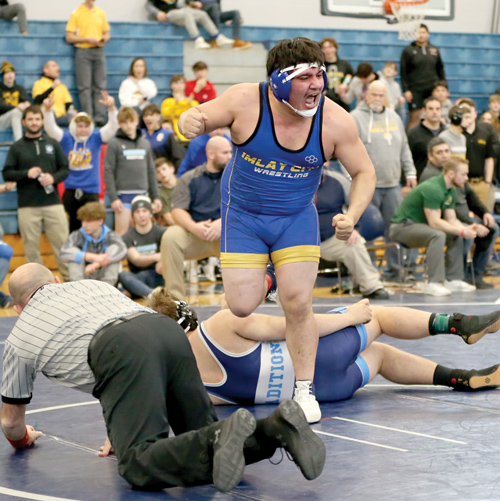 They qualified with top-four weight class placings last Saturday at a regional in Richmond.

Dominic D’Ambrosio and Cristian Rojas led Imlay City with second-place showings. The former completed 119-pound action with a 25-10 loss to Dundee’s Braeden Davis and the latter finished his run at 125 pounds when he was pinned by Dundee’s Cameron Chinavere with 3:31 gone.

A group consisting of Tanner Land, Julian Rojas and Anthony D’Ambrosio provided Imlay City with thirds. Land wrapped up 103-pound action when he pinned Dundee’s Ashton Viers with 4:23 elapsed; Julian Rojas ended his stint at 130 pounds with a 7-4 victory over Algonac’s David Clemens; and Anthony D’Ambrosio ended 145-pound action with a triumph over Algonac’s Jake Kasner (his injury time ran out).

Latham Perry and Chris Torres tacked on fourths to Imlay City’s cause. The former concluded his stint at 215 pounds when he was pinned by Cros-Lex’s Andre Penny with 2:56 gone and the latter wrapped up 285-pound action when he was pinned by Notre Dame Prep’s Jeronimo Ballesty with 42 seconds elapsed.