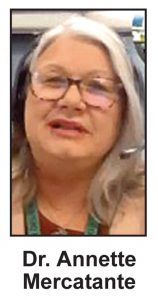 ST. CLAIR COUNTY — The county will be searching for a new health department director. That comes after the Board of Commissioners (BOC) voted last week to split the two roles Dr. Annette Mercatante currently holds—medical health officer and medical director. After the vote, Mercatante said she does not plan to apply for either position. Her current contract with the county is due to expire in June 2022.

“While I’m disappointed in the BOC’s decision, I want the residents of this county to know that no matter what happens, the staff at the Health Department remains committed to prioritizing the health and safety of our community. We will do everything possible to ensure that the essential services we offer stay intact throughout any transition,” Mercatante said in a statement released Friday.

Others voting in favor of the motion were Jeff Bohm and Dave Vandenbossche while Jorja Baldwin and Lisa Beedon voted no. Commissioner Duke Dunn was not in attendance.

County Administrator Karry Hepting and many within the local medical community urged the board to not separate the positions. Hepting believes it will be hard to find qualified individuals to serve in the role and medical professionals believe Mercatante was being targeted for her response to the COVID-19 pandemic.

The discussion over separating the two positions started earlier this year after Mercatante issued a four-week mask mandate for St. Clair County schools. It expired in late January and some commissioners had issues in the way the mandate was communicated.

“It’s important to look at all of the health department’s accomplishments under her leadership over the last 14 years and not base a decision solely on the communication of two decisions made during a global pandemic where everyone is working toward the same goal of keeping the community safe,” Dr. John Pelachyk, president of the St. Clair County Medical Society wrote in a letter read at the Feb. 17 meeting.

Residents in opposition to public health mandates said that Mercatante has violated their civil liberties and acted with arbitrary power. Rushing said that in communication with his constituents he received 15 calls against her for every one in support.

Rushing said he believes Mercatante has not been doing her statutory duty nor has she been held accountable for her actions. He implied that preventative measures, like the school mask mandate have “damaged” children and suggested that doctors who voiced their support for her had “financially benefitted from her decisions.”

St. Clair County is just one of two counties in all of Michigan who have a combined medical director and medical health officer. Bohm, the commission’s chair, said the county opted to go that route during the recession to save money.

“Ninety-six percent of other health departments have the other model. I don’t think we’re doing it right,” Rushing said.

Hepting and other commissioners pointed out that although the position will be split, only the health officer can issue orders or mandates.