DRYDEN — If there’s ever been proof that the quote above is true, that proof would be Major General George Owen Squier.

From humble beginnings as the son of a farmer, Gen. Squier rose out of childhood trials and tragedy to become known and remembered as the founder of the modern Air Force, the creator of background sounds known as ‘Muzak,’ and the inventor of telephone signal multiplexing, which allows for multiple transmissions on a single line. 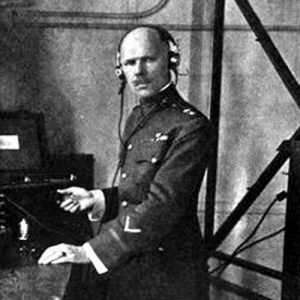 With just an 8th grade education, Gen. Squier gained entrance into West Point, and earned the distinction as the Army’s first Ph.D. through advanced study at Johns Hopkins University.

Along with being noteworthy, Squier’s accomplishments are also a source of pride and inspiration for a dedicated group of Dryden residents who aim to erect a statue in his honor.

Since October of 2015, a group of volunteers has hosted garage sales, bowling events, a 50/50 raffle, dinner-dance and even collected returnable bottles and cans to raise the $45,000 to have a unique statue created and installed at Dryden Memorial Park for all to see.

Though it’s taken almost seven years, the people behind the Major General George Owen Squier Statue Fund are closing in on their goal.

Fundraising efforts have stalled a bit over the past couple of years or so. Papineau says the COVID-19 pandemic prevented volunteers from hosting in-person events and from collecting donations at community functions.

“We had to stop working on fundraising because of COVID,” Papineau says. “That’s when we started collecting returnables to take back, which was very humbling.”

Efforts paid off, though, Papineau adds, noting that the returnables brought in more than expected.

“We brought in around five to six thousand dollars that way, which is kind of crazy,” she says.

Another anonymous donor recently handed over a generous sum, Papineau notes, which has put new wind into their sails.

“The push is out to reach the goal, and we’re over the hump. We’re getting close,” she says.

Along with having the statue created by well-known local artist Suzanne Johnson, the $45,000 goal includes a sign and a security system installed with the statue, along with a base.

“We will be just so glad to see him standing in the park on a big rock,” says Squier Statue Fund President Darlene Johnson.

“We’re getting so excited and can’t wait for the big doings when the project is complete. It will be wonderful,” she says.

Johnson, who has long been taking care of the flower beds at Memorial Park, was among the founding members of the statue fund. She read a book about Gen. Squier, and attended a presentation in 2015 by Dr. Laurence A. Lyons, author of ‘George Owen Squier,’ who came to Dryden to present his and Paul W. Clark’s biographical work.

Both Johnson and Papineau were impressed and inspired by Squier’s rise in the military and his contributions to his country and his hometown.

“At this point in time it’s important to have someone we can look up to, and who’s done so many things for our community in the past,” Papineau says.

“We want to let the kids know that they can achieve anything they desire even if they’re from the little town of Dryden.”

According to its mission statement, The Major General George Owen Squier Statue Fund is a not-for-profit, non-political organization comprised of local citizens, scholars and community leaders who serve as fundraising and educational ambassadors in conjunction with the Village and Township of Dryden, Michigan. It is registered as a 501(c)3. Well known Dryden veteran Spencer Kent is the treasurer.

For a full biography, historic photos and more information about the efforts to memorialize General George Owen Squier, visit generalsquier.org.